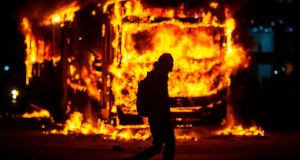 A bus in flames at a protest organised by the National Students Union in Rio de Janeiro: Students and teachers began a nationwide demonstration on Wednesday in “defence of education”. Photograph: Mauro Pimentel/AFP

Brazil’s far-right president Jair Bolsonaro scored an own goal this week when he described those protesting against budget cuts to the country’s education system as “useful idiots” and “imbeciles”.

The remarks were widely seen as having inflamed anger and boosted turnout at protests on Wednesday in which tens of thousands of people took to the streets in more than 200 cities across the country.

Professors and other staff members marched with secondary and university students from both the public and private sector against the cuts with many carrying signs demanding “Bolsonaro Out”.

The demonstrations were the first nationwide mobilisation against an administration whose first five months in office have been marked by institutional chaos and scandals involving the president’s family.

“Bolsonaro calls us idiots but he is the ignorant one and negligent as well,” said Lorena Reis, a resident pharmacologist at São Paulo’s largest teaching hospital who attended the rally in the country’s biggest city. “Without education a society cannot evolve and at our institution we are already suffering from a lack of resources.”

Education minister Abraham Weintraub first announced cuts to three federal universities for what he said was their promotion of “messing about” rather than focusing on academic standards. In an interview explaining his plans, he denounced universities for hosting politicised events and rallies by political parties. He also criticised them for permitting “ridiculous events” which he defined as “landless activists on campus, naked people on campus”.

Mr Weintraub is an acolyte of Olavo de Carvalho, the former astrologer who has emerged as the guru of Brazil’s new right, and has vowed to combat what he describes as “cultural Marxism” in Brazil’s third-level sector.

The negative reaction to his initial announcement led the minister to drop the idea of punishing individual institutions for what he saw as politically offensive behaviour, and instead unveil a funding freeze across the entire public university sector.

Critics say the move is the latest ideologically motivated policy by a far-right administration hostile to civic norms. “Universities are where debate occurs. They are democratic spaces and Bolsonaro does not know how to handle these concepts so that is why he is attacking us,” says Prof Fábio Alexandre dos Santos of the Federal University of São Paulo.

As marchers took to the streets on Wednesday, the minister was in the lower house of congress explaining the funding cuts to deputies. He blamed the previous administrations of presidents Dilma Rousseff and Michel Temer for the lack of money for the sector. “We are not responsible for the disaster in education. We did not vote for them,” said Mr Weintraub.

The minister was visibly tense during the session, getting drawn into slanging matches with left-wing deputies who demanded his resignation.

Noticeably absent from the chamber was the large bloc of deputies from centre-right parties on whom the Bolsonaro administration is reliant for getting any of its legislation through the fractious and increasingly unruly chamber.

Without a majority in Congress, the Bolsonaro administration looks isolated in Brasília just as a corruption investigation into alleged money-laundering by the president’s son, Senator Flávio Bolsonaro, has resulted in Rio prosecutors being granted access to bank records of 86 people, including at least five former employees of the president’s office when he served in the lower chamber.