After years of denials, Don’t Tell Anyone forces bishops to face up to weight of cover-ups 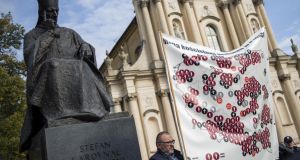 A protest against the sexual abuse of children by Polish priests in Warsaw in October 2018. Archbishop Stanislaw Gadecki, head of the Polish bishops’ conference, has called an extraordinary meeting next Wednesday. Photograph: Attila Husejnow/SOPA Images/LightRocket via Getty Images

Poland’s powerful Catholic Church is in meltdown over a new documentary in which priests accused of abusing children are confronted by their victims.

Polish bishops have been left shellshocked by the sheer weight of evidence of abusing priests and church cover-ups, after years denying their church faced any Irish-style problems.

The documentary Don’t Tell Anyone, available on YouTube with subtitles, is a disturbing insight into an institution that was a source of support and solidarity for millions of Poles, and enjoyed unparalleled power in the country’s difficult history.

Anna Misiewicz from Kielce, between Warsaw and Krakow, told of how her “promotion” – from eight-year-old presbytery cleaner to collection money counter – ended in sexual abuse.

“He touched my breasts and masturbated himself with my hands, kissed . . .” she said. “He kept repeating the word ‘more, more more’ and when he was finished he left the room and pretended as if nothing had been going on. He was certain I would tell no one.”

Even as an adult she still has nightmares and sleepless nights, so she confronted her abuser, who admitted everything as a hidden camera recorded his confession.

“In my examination of conscience I often think I should never have done it, I should not have touched or kissed you, I know I shouldn’t have . . . some stupid passion,” he said, adding that he often said Mass for those he had hurt. “I regret it profoundly.”

Asked by Ms Misiewicz why he had chosen her for abuse, he said that “male issues finally came up when I was of a certain age, the fatherly love manifested itself a little and then it turned into this physical attraction”. He admitted preying on others – always girls.

The film continues with tales familiar to Irish ears: problematic priests moved from one parish to the next and traumatised victims and their families blocked by bishops who shifted, rather than solved, problems. In one case, a priest convicted for abusing girls and banned forever from contact with minors was allowed work in a retreat programme with children.

In another case, a defrocked priest continued to say Mass even after the suicide of a former altar boy.

In one village northwest of Warsaw, a local man whose nephew was abused by the priest told filmmakers: “He couldn’t stop himself that man. But what to do? The bishop kept him.”

When the man decided to complain to the bishop, promises of support from his neighbours evaporated: “I was left alone, like an idiot.”

The film has been viewed more than 16 million times online and has sparked an emotional reaction in Poland, where 85 per cent of people identify as Catholic and a third attend weekly mass.

At the weekend Gdansk archbishop Slawoj Leszek Glódz dismissed the film as “idiocies”, but was forced to apologise on Wednesday.

Archbishop Stanislaw Gadecki, head of the Polish bishops’ conference, has called an extraordinary meeting next Wednesday. Primate Wojciech Polak, the most senior clergyman in Poland, told Polish radio he saw no need for any bishops to resign but agreed more needed to be done to protect minors.

“We ask God, the victims of abuse, their families and the Church community for forgiveness for all the harm done to children and young people and their relatives by clerics, consecrated persons and lay workers in the Church,” the bishops said in a statement.

At the same time, the church is fighting a lawsuit to annul a one million zloty (€232,620) compensation to a woman repeatedly raped as a teenager by her local priest.

In March a study released by bishops showed nearly 400 Polish priests were accused of sexual abuse of minors from 1990 until 2018.

The documentary has increased pressure on the ruling Law and Justice (PiS) party, which for years has dismissed abuse allegations against the church as equivalent to attacks on Poland itself.

The national conservative pary launched a re-election campaign identifying homosexuals as a danger to Polish morality and children.

Now the party has to decide whether to pivot against an important vote-bringer – many Catholic priests and bishops endorse PiS from the pulpit – or risk its hopes of winning a second term in office next September.