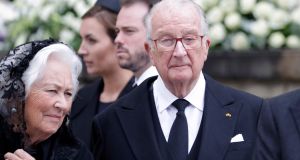 King Albert II, who abdicated from the Belgian throne six years ago, is to be fined €5,000 for every day that he refuses to undergo a DNA test to disprove claims he conceived a child during an extramarital affair in the 1960s.

An appeals court made the order after rejecting Albert’s attempts to delay giving a saliva sample, in the latest twist of a long-running paternity claim by a 50-year-old artist, Delphine Boël.

Boël has been fighting in the courts for six years to get proof that Albert (84), is her biological father. If she is able to prove paternity she could take the name Delphine Van België and, by royal decree, the title of princess. She would also be entitled to one-eighth of Albert’s estate, half of which is reserved for his children.

Boël’s claim received a boost last autumn when the Brussels court of appeal ruled that Jacques Boël was not her biological father and instructed an expert from Erasmus hospital to carry out a genetic test to compare her DNA with Albert’s.

Albert’s lawyers argued he should not have to give a sample until an appeal against that ruling was heard in a higher court. On Thursday, a judge said the process should not be delayed, although the results of the test will not be heard until the court of cassation, Belgium’s court of last resort, makes a decision on the legality of the original ruling.

Marc Uyttendaele, one of Boël’s lawyers, said they were satisfied with the decision. “We argued here with the aim of obtaining evidence for the continuation of the test,” he said. “So we fully agree that the DNA results will not be revealed before the court of cassation has given its ruling.”

The fines would make a sizeable dent in Albert’s fortunes. He lives off a state allocation of €961,000.

On the day Albert stepped down in 2013 citing ill health, Boël’s mother, Baroness Sybille de Selys Longchamps, spoke publicly for the first time about her alleged affair with the king in a television interview.

“I thought I could not have children because I had had an infection,” she said of the relationship, which it is claimed spanned from 1966-1984. “We had not taken any precautions.”

She continued: “It was a beautiful period. Delphine was a love child. Albert was not the father figure but he was very sweet to her.”

Albert later admitted he and his wife had gone through a marital crisis in the 1970s but the king has never admitted to fathering a love child.

The court of cassation’s ruling is not expected before the end of the year. – Guardian