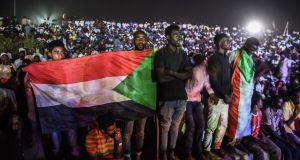 Sudanese protesters are gathered during a sit-in outside military headquarters after clashing with security forces in Khartoum. Photograph: Mohamed el-Shahed/AFP/Getty

Sudan’s civilian protesters have vowed to continue their weeks-long sit-in outside Khartoum’s army headquarters, after negotiations between the military and protest leaders came to a halt following an expansion of the protest space and responsive violence by Sudanese forces.

An agreement on a transitional body that would lead the country for the next three years was expected to be reached on Wednesday, but early on Thursday, the chief of Sudan’s ruling military council, General Abdel Fattah al-Burhan, announced the suspension of talks for three days.

This came after protesters erected more roadblocks around the city, with Gen Burhan saying civilian demonstrators broke an understanding on de-escalation and are disrupting life around the capital city.

Gen Burhan said the military feels it is necessary to wait until there is a “suitable atmosphere . . . to complete an agreement”, and called for new barricades recently erected around the city to be removed.

The Declaration of Freedom and Change Forces (DFCF), the alliance representing the opposition, called the suspension of talks “regrettable”.

“[It] ignores the reality of the revolutionaries who are increasingly angry as a result of the bloodshed and the souls that we lost,” it said in a statement.

At least four people were killed in the sit-in area on Monday morning, when security forces opened fire, according to protesters. The Sudanese army blamed the attack on “unidentified elements”.

More shots were fired by Sudanese forces on Wednesday, wounding at least nine people, according to protesters at the sit-in.

Ahmad Mahmoud, one of thousands of protesters who have been camped outside the army headquarters since April 6th, told The Irish Times that people there have no plans to move, and confirmed they have expanded the space they’re occupying.

“Everyone is staying,” Mr Mahmoud said. “We’re staying until we get a civilian government and have our demands met. Everyone you ask will tell you this.”

“We expanded the sit-in area with barricades three days ago, we build tens of barricades on Nile Street, one of the major streets in Khartoum. All essential roads were blocked yesterday all over the city.”

He said they had later cleared a portion of Nile Street since, to facilitate the military, but are now ready for “civil disobedience” to remove the Sudanese regime once and for all.

Many Sudanese civilians point out there is little difference between the military involved in negotiations now, and those who were in high-level positions under Sudanese president Omar al-Bashir, who was removed in a coup on April 11th.

“People are very optimistic,” Mr Mahmoud said. “I am optimistic because we are holding the power. We, the protesters, are giving power to the people who are negotiating on our behalf.