Oligarch returns to Ukraine ahead of new president's inauguration 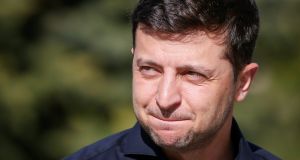 Ukraine’s president-elect and erstwhile comedian Volodymyr Zelenskiy has confirmed that he will take office next Monday, as the return of his scandal-plagued business partner to the country rekindled questions about their relationship.

Mr Zelenskiy reluctantly accepted the result of a deputies’ vote on the inauguration date but criticised them for refusing to hold the event on Sunday, to avoid traffic chaos in Kiev and make it easier for foreign dignitaries to attend.

His office said parliament’s decision would “annoy” Kiev residents and accused deputies of stalling over the inauguration of a political newcomer who has pledged to sweep Ukraine’s discredited elite from the halls of power.

Mr Zelenskiy (41) became famous as an entertainer and for playing a fictional Ukrainian leader in television comedy Servant of the People, but he crushed incumbent Petro Poroshenko in a presidential election run-off last month.

He hopes his new party – also called Servant of the People – will win parliamentary elections later this year and help him strengthen the rule of law, crush corruption, attract foreign investment and end a five-year war in eastern Ukraine with Russian-led militants.

Critics of Mr Zelenskiy say he will do the bidding of billionaire oligarch Ihor Kolomoisky, whose television channel broadcasts his shows and gave him positive coverage during the election campaign while lambasting Mr Poroshenko.

In the early hours of Thursday, Mr Kolomoisky arrived back in Ukraine from Israel after an absence of almost two years.

He left Ukraine after falling out with Mr Poroshenko and seeing one of his key assets, a major lender called PrivatBank, nationalised in 2016 amid fears of collapse and allegations of fraud.

A Kiev court ruled in April that the nationalisation was illegal, raising the prospect that Mr Kolomoisky could regain control of the bank or receive compensation.

Ukraine’s central bank is appealing against the ruling and defends the nationalisation, which was welcomed by Kiev’s western backers at the time as a sign that its authorities were willing to face down powerful tycoons.

Mr Kolomoisky’s return suggests he now feels safe from arrest in Ukraine, but increases pressure on Mr Zelenskiy to show he is not beholden to the billionaire. Both men insist they have no political relationship or common agenda.

One of the first items on Mr Zelenskiy’s agenda as president will be whether to seek to dissolve parliament and bring forward parliamentary elections that must take place before the end of October.

Polls suggest his nascent Servant of the People party would easily win such a vote, even before it releases a manifesto or list of candidates, in another indicator of Ukrainians’ strong desire for radical change and new faces in politics.

It will be joined on the ballot paper by another new party, Holos, which was launched on Thursday by probably Ukraine’s most popular rock singer, Svyatoslav Vakarchuk. “Holos” means “voice” and “vote” in Ukrainian.

Parliament “has become a toxic swamp that swallows up our future. We must change that”, said Mr Vakarchuk (44), who with his band Okean Elzy was a prominent supporter of Ukraine’s 2004-5 Orange Revolution and 2013-14 Maidan Revolution.