Theresa May to agree date for departure at June meeting 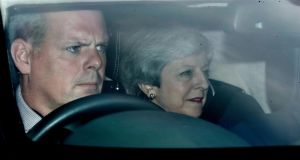 British prime minister Theresa May arriving for a meeting with members of the 1922 Committee in London on Thursday. Photograph: Alastair Grant/AP

Theresa May has agreed to set a date early next month for her departure as prime minister, regardless of whether MPs approve her Brexit deal. Mrs May agreed to meet the backbench 1922 Committee to set out a timetable for a leadership contest after the second reading of the Withdrawal Agreement Bill (WAB) in the first week in June.

“We have agreed that she and I will meet the following the second reading of the Bill to agree a timetable for the election of a new leader of the Conservative and Unionist Party,” 1922 Committee chairman Graham Brady said in a statement agreed with the prime minister.

Under Conservative Party rules, MPs whittle down the field of candidates to just two, who then go before the full party membership in a postal ballot. Mrs May has said the Withdrawal Agreement Bill (WAB) must pass all its stages before the summer recess so the contest would begin towards the end of July at the latest.

Allowing time for MPs to choose the two final candidates in eliminatory votes each Tuesday and Thursday as well as a number of weeks for hustings ahead of the ballot, the new leader should be in place in time for the Conservative Party conference in September. Former foreign secretary Boris Johnson told an insurance brokers’ conference in Manchester on Thursday that he will be a candidate to succeed Mrs May.

“There’s no vacancy. On the other hand, what I will say is that there has been a real lack of grip and dynamism in the way we’ve approached these talks. We’ve failed over the past three years to put forward a convincing narrative about how we exploit the opportunities of Brexit. All I can say, as tactfully and usefully as I can, is that I have a boundless appetite,” he said.

Mr Johnson’s supporters argue that he represents the Conservatives’ best chance of pushing back Nigel Farage’s Brexit Party, which is predicted to emerge as the biggest party in next week’s European Parliament elections. Mr Johnson said he had predicted the rise of a party like the Brexit Party 18 months ago.

“I said if we continued in this supine way, there would rise again, like a great puffball, a right-wing party. The only way to address it is for us to get Brexit done, but also to get it done in such a way that we actually deliver on the mandate of the British people. If we can’t do that, there really will continue to be that threat from the Brexit Party and others,” he said.