Brussels hardest-hit capital after Madrid, while the Netherlands prepares to send hospital patients to Germany 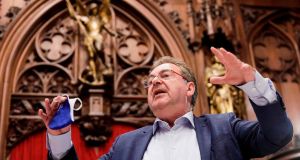 Brussels minister president Rudi Vervoort: “We decided that bars, cafes but also tea rooms will have to close their doors and remain closed,” said . “One in seven people tested in Brussels returns a positive result, the virus is everywhere in the region.” Photograph: Thierry Roge/Getty Images

A powerful second wave of the coronavirus pandemic has closed bars and cafes in Europe’s capitals as authorities grapple with how to contain the spread of the disease.

The Brussels regional government announced on Wednesday that it would shut cafes and bars for a month after a surge in infections made it the hardest-hit European capital after Madrid, with a rate of 502 coronavirus cases per 100,000 residents over the past two weeks.

“We decided that bars, cafes but also tea rooms will have to close their doors and remain closed,” said Brussels minister president Rudi Vervoort. “One in seven people tested in Brussels returns a positive result, the virus is everywhere in the region.”

It follows similar action by Paris, which shut all bars, gyms and swimming pools for two weeks to curb the spread of the virus after a new record of almost 17,000 new infections were logged on Saturday, with 49 deaths.

Governments around the world are struggling to manage a surge in infections and the economic fallout of the pandemic, with the World Bank warning that the virus could push as many as 150 million people into extreme poverty by the end of 2021, largely in poor and developing countries.

Across Belgium, party venues are to shut, sports spectators banned and social groups limited to a maximum of four. Authorities are to consider whether to keep schools and universities open on Friday, after a rise in infections that experts say follows a common European trend of being driven by transmission among the young.

Across the border in the Netherlands, hospitals reported a shortage of remdesivir, a drug used for treating severe coronavirus cases, after nearly 10,000 cases were reported in 48 hours in the country of 17 million. The health ministry has asked German hospitals to set aside spare intensive care beds for Dutch patients, in preparation for hospital capacity running out as it did in March.

In Spain, new restrictions have come into force on Madrid and nine neighbouring towns that restrict residents from leaving their area for non-essential reasons. The rules require shops, hotels and restaurants to close early, and limit social gatherings to six people.

The Czech Republic declared a fresh state of emergency after the country recorded a record 3,793 new cases in a day in what prime minister Andrej Babis described as a “rocket-like rise”, with an average of 303.3 per 100,000 infected over the past two weeks, a rate second in Europe only to Spain’s level of 319.3.

Italy has so far avoided the dramatic increases in cases seen elsewhere in Europe, but the government on Wednesday made face masks compulsory outside the home nationwide after a jump in cases to 3,678 in 24 hours.

In Russia,  Moscow mayor Sergei Sobyanin withdrew public transport allowances for students and the over-65s to try to reduce interaction during travel, after more than 1,000 people were hospitalised with virus in the city on Tuesday.

“Every day the situation with the coronavirus is becoming more difficult and dramatic,” Mr Sobyanin wrote on his website.