Drug would be among first treatments for milder cases 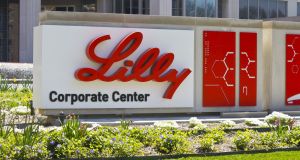 So far, most of the drugs used for Covid-19 are focused on patients who are already hospitalised. Photograph: iStock

US drugmaker Eli Lilly has applied for an emergency authorisation of its Covid-19 antibody in the US, which would be among the first treatments available for patients with mild to moderate cases of the disease.

The Indianapolis-based drugmaker also said that patients taking a combination of two of its antibodies were almost 85 per cent less likely to be hospitalised or attend the emergency room compared to those taking a placebo.

The antibody therapies, which are designed to neutralise the virus by blocking its entry into human cells, could provide a treatment option for patients with mild to moderate symptoms. So far, most of the drugs used for Covid-19 are focused on patients who are already hospitalised, including Gilead’s remdesivir and the generic steroid dexamethasone.

Daniel Skovronksy, Lilly’s chief scientific officer, said he believed the data, as well as previously announced results for treatment with a single antibody, provided “sufficient evidence” that they could help patients with a high risk for serious outcomes.

“Our teams have worked tirelessly the last seven months to discover and develop these potential antibody treatments,” he said.

Shares in Eli Lilly rose 2.6 per cent to $147.84 in morning trading in New York, as the company said it could deliver up to a million doses of its single antibody therapy in the fourth quarter, while also ramping up production of the combination therapy in the first quarter of next year.

Lilly faces competition from Regeneron, which is developing an antibody treatment that was taken by Donald Trump, US president, last week. Regeneron’s antibody cocktail has also shown it can cut viral load, improve symptoms and reduce medical visits.

Shares in Regeneron rose more than 7 per cent on Monday after Mr Trump’s doctors revealed over the weekend that he had been given the drug, as investors hoped this was a sign it was heading for an emergency use authorisation.

Lilly announced positive results for the single antibody treatment, codenamed LY-CoV555, in September, which cut hospitalisations by 72 per cent. More than 850 patients have now had doses of this treatment, either alone or in combination.

The drugmaker is now planning an open label study – where patients know they are taking the drug – to collect more data. – Copyright The Financial Times Limited 2020