Varadkar says he and Holohan are ‘on the same team’ 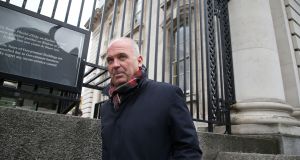 Tánaiste Leo Varadkar has said he contacted chief medical officer Dr Tony Holohan to discuss his harsh criticism of the recommendation to move the entire country to Level 5.

On Monday night, Mr Varadkar strongly criticised the recommendation on Sunday by the National Public Health Emergency Team (Nphet) that the entire State should go from Level 2 to the most severe lockdown Level 5 of restrictions to combat the spread of Covid-19.

Following a meeting between the three Government party leaders and the CMO on Monday the Cabinet rejected the advice and opted for the State to move to Level 3 instead.

Dr Holohan, who returned to his role at the weekend, chairs the committee and Mr Varadkar said on RTÉ’s Claire Byrne Live show that its advice was not “thought through” and was “landed on us”.

Speaking on Wednesday, Mr Varadkar said that he did not apologise to Mr Holohan when they spoke on Tuesday as neither he nor the chief medical officer were in the business of apologies. He said both had worked together for a long time and both had a discussion and were keen to move on.

The Tánaiste said he wanted to set out the context of his comments on Monday night.

“As people understand I was really unhappy about what happened on Sunday night and the anxiety and fear that it caused to hundreds and thousands. I gave voice to the anger and frustration.

“I rang Tony Holohan last night. We are on the same team,” he said, adding that both now wanted to move on.

Earlier, Taoiseach Micheál Martin paid tribute in the Dáil to Dr Holohan and his “selfless” commitment to the country.

Mr Martin said he met the CMO on Wednesday morning and they had a “very good discussion. I paid tribute to his commitment to the country and the selfless way he has come back to help the country deal with the pandemic.”

Dr Holohan stood back from his position for a number of months to care for his wife who is receiving palliative care for terminal cancer.

Mr Martin said: “We both share a clear determination to get the country through Covid-19 with the help of everyone in this House and across society also.”

The Taoiseach previously worked with the CMO when he served as minister for health during the Sars (severe acute respiratory syndrome) epidemic in 2003.

But on Tuesday evening the Tánaiste warned his parliamentary party that a short lockdown may still happen despite the Government rejecting Nphet’s advice to move to Level 5.

The Taoiseach told the Dáil on Tuesday that the Government had to look at the “wider issues” of the economy, business and jobs and not just Nphet advice.