Guidelines will now be put in place by July 31st, 2021, Minister says 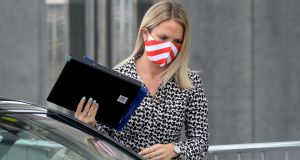 Minister for Justice Helen McEntee informed the Justice Committee of the change to the personal injuries guidelines in a letter sent on Wednesday. Photograph: Alan Betson / The Irish Times

New rules to set out the level of damages the courts can award for personal injuries will be introduced three months earlier than planned, according to Minister for Justice Helen McEntee.

The personal injuries guidelines were due to come into force at the end of October next year, but will now be put in place by July 31st, 2021, the Minister told the Justice Committee in a letter sent on Wednesday.

They aim to create a system of compensation where awards will “be proportionate to the injury sustained and just and fair to both parties”, according to the website of the Judicial Council, under whose auspices they are being drawn up by a committee of judges led by president of the High Court Mary Irvine.

In her letter, Ms McEntee wrote that the personal injury guidelines will be a “key part” of “bringing down insurance premiums and the cost of insurance overall”. A spokesman for the Minister said the accelerated timeline “shows the Government is serious about implementing reform as quickly as possible”.

Once they are drawn up, they are sent for review to the Judicial Council, which will now have less time to consider the guidelines before they come into effect. The council plans to first consider them next February.

Ms McEntee’s spokesman said, “It is important the chairperson… is given the time she needs to complete her work to her satisfaction”.

The original deadline for the committee to deliver the draft guidelines was the end of this month, but due to the pressures of work on Ms Justice Irvine, the six- week extension has been granted.

A letter from Ms Justice Irvine to the Attorney General, also sent to the committee, outlines that she is seeking the extension partially because of the workload placed on her as President of the High Court by the Covid-19 pandemic, and several other roles she fulfils, including as a Supreme Court judge. Until July, she was also due to sit on the CervicalCheck tribunal.

Her letter also points to pressures in the High Court system brought about by a shortage of judges, which she says is “at present . . . close to intolerable”

“This is in no small measure due to the fact that we are two and half judges short of our normal compliment,” she explains. Judges Tony O’Connor and Brian Cregan have been unavailable to the court due to work they have been seconded to do on the CervicalCheck tribunal and Siteserv inquiry, respectively. Meanwhile, Mary Rose Gearty is unavailable apart from two days a week due to a judicial training position.

The letter also outlines that the committee of judges working on the guidelines has sent the data it has gathered to Verisk Ireland, a data analytics firm, for an independent opinion “as to the significance of that data and as to the committee’s preliminary conclusions”. The parameter of damages proposed for each type of injury cannot be finalised until that report is complete, Ms Justice Irvine wrote.

The Judicial Council will consider the guidelines next February, and now will be asked to agree upon them by the end of July. Once they have been adopted, Ms McEntee will bring in the remaining provisions of the Judicial Council Act, which will mean that when a court departs from the guidelines when awarding damages in a personal injuries case, it will have to outline the reasons why. They will also result in the Personal Injuries Assessment Board no longer being responsible for preparing a book of quantum.

1 Astronaut Chris Hadfield offers to ‘talk space’ with Adam from the Toy Show
2 Ireland in precarious position as third Covid-19 wave could be more deadly, Nphet warns
3 Man dies, five other injured after building collapses in Tralee
4 Covid crisis: Republic to move back to Level 3 as shops open from Tuesday
5 Man arrested over murder of mother and her two children
Real news has value SUBSCRIBE