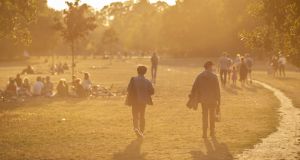 Summer in Berlin is why most locals can cope with winter in Berlin. Scorching 35-degree days end with long, balmy evenings: a dip in a lake and a picnic, or a cool drink in a beer garden.

The German capital in summer easily beats out Disneyland as the happiest place on Earth – and is far better value. With the ongoing Covid-19 pandemic, everything should be different this summer. But everything is the same as ever.

Cycling around town these last evenings in a T-shirt and shorts – another Berlin summer bonus – the street cafes are abuzz with chatty customers, the Arab Shisha bars still reek of liquorice tobacco, while the late-night kiosks haven’t sold as much beer since the 2006 World Cup.

Berlin’s late-night kiosks (Spätkauf or Späti) have sprung up like mushrooms in the last years: younger party people enjoy €1 beers, a third of the bar price, while organised crime gangs have shifted from restaurants to kiosks as a more efficient way to launder money.

City authorities are worried about the Späti clusters of drinkers, less interested in social distancing with each successive beer.

“I think it’s also a mental problem: people see rising numbers but think it doesn’t affect them,” says Stephan von Dassel, the mayor of Berlin’s Mitte district. “You can get used to everything and comfort often goes before caution.”

He has called for a ban on kiosk sales of alcohol from 6pm, following the example of some Hamburg districts, but the idea has gone down like a lead Zeppelin. Most theatres are still closed but each summer evening in Berlin offers spontaneous street drama, usually variations on a morality play where concern for others collides with the right to individual happiness.

Berlin is divided once more, this time in three camps. You can spot the archetypal member of the first camp outside their apartment, watering a parched tree while glaring at the street party before the adjacent Späti.

The second camp – think beer garden families with hyperactive young children out long after bedtime – are anxious to salvage something of the summer, anticipating a long winter lockdown.

Meanwhile a third camp – young revellers on a rocket fuel of cheap beer and schnapps – have embraced Summer in Berlin 2020 like hardened hedonists.

We just want to party, forget about things for a while, celebrate life

You’ll find many of the third camp after 10pm in the Kreuzberg neighbourhood, heading up the hill into the dark expanse of the Hasenheide.

This park, adjoining an abandoned airport airfield, became a spontaneous outdoor techno party location early in the lockdown. On my last visit in early June it had a pleasant neighbourhood feel: people dancing away their worries while keeping their distance.

Each week since has brought exponential growth in numbers, thanks to social media. Two weeks ago was the last big party, several hundred people dancing in the dark while DJs – equipped with laptops, mobile speakers and generators – pumped out the tunes.

Lingering on the fringes, drink and drugs were in ample supply. “We just want to party, forget about things for a while, celebrate life,” said Klara, a 25-year-old medical student, emerging with a gleam of sweat from a throng of dancers.

Not everyone is here for the music. A skinny young man with blonde hair, dark roots and a glazed expression asks me if I know the way to the “Zauberwiese”, the magical meadow.

He’s looking for a copse of trees off the beaten track, repurposed as a stopgap darkroom. A makeshift tent has been pitched in the undergrowth and, for the slow learners, a sign has been added: “Sex House”.

In a pandemic like this, every parent’s worst nightmare is a potential public health emergency. But Berlin has always had its own rules. Around 1am, resigned police turn on floodlights and break up the party, sparking a game of cat and mouse in the dark.

Many revellers have already moved on from parks to industrial ruins where, partying undisturbed beneath the stars, it feels like a renaissance of Berlin’s post-wall days.

If it wasn’t for Covid-19. With Germany’s new daily infections now beyond 1,500, levels last seen in early May, the party may be over soon.

It’s nearly 3am as I near home, passing the plaque to Anita Berber who lived and died here aged 29. The dancer was notorious in Weimar Berlin for drug-fuelled show routines she called her “dance of vice, horror and ecstasy”.

After her death, a friend said Anita was driven by the “wild urge of her generation to live, without thinking of an already lost future”.

With its street kiosk drinkers and park raves, time will tell if party-loving Berliners were right – or terribly wrong – to seize this summer.

As the August evenings grow shorter it’s hard to shake the feeling that, like a century ago, this city is dancing on a volcano.