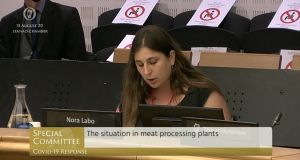 A great number of Romanian workers for years were cheated out of their social security rights in Ireland by the employment agency who was hiring them to work in several meat plants in Munster, a union representative has told the Oireachtas committee on Covid-19.

Nora Labo of the Cork Operative Butchers’ Society - a branch of the Independent Workers’ Union - said the Romanian nationals were employed as self-employed contractors declared in Poland.

She said “all their contributions were sent to Polish, not Irish revenue, even though all these people were working full time in Ireland for years and had no ties to Poland”.

She said at a hearing of the committee on Thursday that “for many years, all these workers had no annual leave, no right to illness benefit, child allowance etc, had no PPS numbers, and were de facto invisible in Ireland”.

Ms Labo said when some of these workers were self-isolating on suspicion of having contracted Covid-19 in March, they had no access to a doctor and that no GP would take them.

She said agency tried to force them to apply for unemployment benefit instead of the Covid-19 illness benefit, “taking advantage of the fact that they had no GPs and had no English”.

Ms Labo told the committee there were no intrinsic reason why working in a meat plant should be more conducive to contracting Covid-19 than working in any other environment.

“ We are convinced that the reason why Ireland has witnessed so many worrying outbreaks in meat plants in the past months is due to the workers’ substandard employment and living conditions which are the result of the industry’s long-term disregard for the well-being of its staff.”

She said the problems were aggravated by what she described as “unscrupulous practices” of some agencies.

The general secretary of the Irish Congress of Trade Unions Patricia King said under legislation temporary workers provided through agencies should not be treated any less favourably than their counterparts who are directly employed.

However she said that this was being “bypassed” by some employers by constructing a self -employed company system.

“The home employer is actually in Poland not in Ireland at all. That leads to a situation those workers who are fictitiously or bogusly self employed, end up with no entitlements for anything. So the people who lose out are those workers.”

Siptu divisional organiser Greg Ennis told the committee that his union’s members in the meat processing sector “ remain petrified of contracting Covid-19 but feel that they must walk that tightrope every day and in many cases attend work, even if they are feeling unwell”.

He said nine out of ten workers did not have access to sick pay arrangements.

Mr Ennis said workers in the meat industry had a fear of retribution .

“I have never seen an industry where workers are so reluctant to come out front and talk to the media or to union officials about their concerns and that is a scandal,” he said.

He said it was no use cheering workers in the meat sector and calling them essential and then paying them a pittance.

Ms King said it was “untenable” that the Health and Safety Authority (HSA) which had the powers to inspect workplaces and order closures where appropriate, was not notified when workers contract Covid-19.

She said all the indicators were that the HSA did not want to be notified and does not want the task.

She said the HSE “should be sitting on this until it is dealt with”. She said all employers should be working on the basis that HSA inspectors could knock on their door at any time , day or night.

“That is not the case at the moment. This business of by arrangement (inspections) is nonsense.”