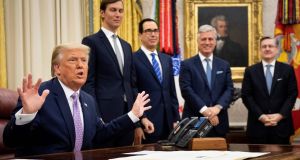 Israel and the United Arab Emirates have reached a historic peace deal that will normalise diplomatic relations between the Jewish state and Gulf power.

The agreement, which the US helped broker, means the UAE is on course to become only the third Arab state to have full diplomatic ties with Israel, after Egypt and Jordan.

A joint statement by the UAE, Israel and the US said the “breakthrough will advance peace in the Middle East region”. But the move will infuriate the Palestinians.

“Israel got rewarded for not declaring openly what it’s been doing to Palestine illegally & persistently since the beginning of the occupation,” Hanan Ashrawi, the veteran Palestinian official wrote on Twitter. “The UAE has come out in the open on its secret dealings/normalisation with Israel.”

Fawzi Barhoum, a spokesman for the Palestinian militant group Hamas, which controls Gaza, said normalisation of relations between Israel and the UAE was “a stab in the back of our people and encourages more violations against our people and their principles”.

Speaking to reporters in the Oval Office on Thursday morning, Mr Trump said he expected some other Muslim countries to agree similar deals with Israel. “Things are happening that I can’t talk about,” he said.

The deal will give him a welcome boost as he campaigns for re-election against Joe Biden, who has a substantial lead over the president in opinion polls.

The president has frequently touted his ability as a dealmaker but he heads towards November without a deal with either Iran or North Korea, despite his repeated insistence that he would reach agreements previous US administrations had failed to achieve.

The UAE, a staunch US ally, has been increasing its intelligence and security co-operation with Israel in recent years as both share common goals in countering Iran’s regional influence and fighting Islamic extremism.

Anwar Gargash, UAE state minister of foreign affairs, said the timeframe for normalising relations with Israel would “definitely” not be long.

The two sides would “negotiate aspects and reach agreements on aspects of what a bilateral relationship looks like, ultimately reaching a reciprocity in diplomatic representation,” he added.

Under Sheikh Mohammed bin Zayed, Abu Dhabi’s crown prince and the UAE’s de facto leader, the Gulf state has pursued an increasingly assertive foreign policy across the Middle East and become one of the region’s most powerful states.

The deal is a victory for Israeli prime minister Binyamin Netanyahu, who regularly touts his success in improving Israel’s relations with Arab states that were once sworn enemies.

As part of the agreement, Israel has agreed to suspend the annexation of parts of the occupied West Bank. Mr Netanyahu had promised to annex areas of the Palestinian territory as he campaigned in elections over the past 12 months, but the process stalled in recent weeks.

Mr Netanyahu said the deal marked a “new era in Israel’s relations with the Arab world” and would lead to “the establishment of official and full peace with the UAE”, including the exchange of ambassadors and investment.

Mr Netanyahu said he remained committed to extending Israeli sovereignty over West Bank settlements, but only in co-ordination with the US.

Palestinian leaders have felt increasingly angry and isolated as Mr Trump has pushed for an Arab-Israeli peace plan tilted heavily in Israel’s favour and recognised Jersualem, the contested holy city, as the Israeli capital.

The UAE’s decision also goes against the Arab League’s position, which is to support the so-called Arab peace initiative, one senior Arab diplomat said. The 2002 plan states that Arab governments would establish normal relations with Israel if it withdrew from occupied territories and accepted the establishment of a Palestinian state.

“Acting unilaterally is inconsistent with the initiative ... some [Arab states] will be angry, others will be less angry,” the Arab diplomat said.

Mr Gargash acknowledged that some countries would not be happy with the move, but added: “We think we have used our political chips right.”

He said persuading Israel to suspend annexation of the West Bank would defuse the “time-bomb” that was threatening the two-state solution – which would lead to a viable Palestinian state alongside Israel.

“The parties that have to resolve this issue are the Palestinians and the Israelis, and we urge they go back to the negotiating table,” he said. “Let us use this to try to extract a commitment from the Israelis not to annex Palestinian land. Is it perfect? Nothing is perfect in a very difficult region.”

In 1979, Egypt became the first Arab state to sign a peace deal with Israel, which fought wars with Arab powers from 1948 to 1973. Jordan reached its agreement with Israel in 1994. _ Copyright The Financial Times Limited 2020