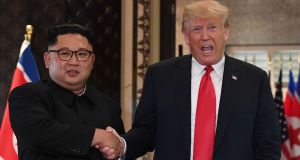 Bob Woodward’s second book on the Trump White House has a title, Rage, and promises to reveal the secrets of “25 personal letters exchanged between [Donald] Trump and North Korean leader Kim Jong-un that have not been public before”.

In the letters, according to details from Simon & Schuster published on the book’s Amazon page on Wednesday night, “Kim describes the bond between the two leaders as out of a ‘fantasy film’, as the two leaders engage in an extraordinary diplomatic minuet”.

Rage, the sequel to Fear, is due out on September 15th, its cover showing Trump’s face in extreme close-up.

Simon & Schuster promised “an unprecedented and intimate tour de force of original reporting on the Trump presidency … with stunning new details about early national security decisions and operations and Trump’s moves as he faces a global pandemic, economic disaster and racial unrest”.

Woodward, 77 and a veteran Washington Post reporter, made his name with Carl Bernstein in the early 1970s by exposing the Watergate scandal, which brought down Richard Nixon.

Fear came out in September 2018 and topped bestseller lists. Based on hundreds of interviews with administration insiders, it contained memorable scenes including senior aides removing papers from the 45th president’s desk, lest he pursue extreme policies outlined therein.

One such incident involved economic adviser Gary Cohn removing a proposal to withdraw from a trade agreement with South Korea, a US ally. Mr Trump’s engagement with the totalitarian state to the north has produced three meetings with Mr Kim and exchanges of kind words, but no deal on denuclearisation and other concerns.

Woodward did not interview Trump for Fear, which the president called “a piece of fiction” by a “liar” with “phony sources”. But in January this year, the president told Fox News the two men had spoken.

“I was interviewed by a very, very good writer, reporter,” Mr Trump said. “I can say Bob Woodward. He said he’s doing something and this time I said, ‘Maybe I’ll sit down.’”

Mr Trump reportedly spoke to Woodward more than once and told senior aides to co-operate. According to the publisher, “what is not known is that Trump provided Woodward a window into his mind through a series of exclusive interviews.

“At key decision points, Rage shows how Trump’s responses to the crises of 2020 were rooted in the instincts, habits and style he developed during his first three years as president.

“Rage draws from hundreds of hours of interviews with firsthand witnesses, as well as participants’ notes, emails, diaries, calendars and confidential documents.”

Speaking to the Guardian about Fear, Woodward said he was dedicated to reporting “what really happened” and said: “Too many people have lost their perspective and become emotionally unhinged about Trump.’”

“I look at my job,” he said, “as: let’s present the rock-solid evidence of what happens. There’s documents, there’s notes, there’s not just the phrase but there’s where they sat and they met and this is what happened. Let the political system respond.”

One subsequent political response to Mr Trump put him in the situation Nixon resigned to avoid: an impeachment trial in the Senate, after House Democrats seized on Trump’s attempts to have Ukraine provide dirt on political rivals.

Mr Trump was acquitted after only one Republican, the senator from Utah and 2012 presidential nominee Mitt Romney, voted to remove him from office.

Ever since the publication of Fire and Fury by Michael Wolff, books about Mr Trump and his presidency have been big business. Most recently, the former national security adviser John Bolton and Mary L Trump, Mr Trump’s niece, have published instant bestsellers.

As Mr Trump’s re-election battle against Joe Biden approaches – and as the president seeks to undermine the integrity of that election, which will occur under a coronavirus pandemic that has killed more than 165,000 in America – Woodward’s new book is eagerly awaited.

Its title may have derived from a conversation Woodward had with Mr Trump – and Bob Costa of the Washington Post – at Mr Trump’s hotel in Washington on March 31st, 2016.

Responding to Woodward’s contention that the Republican party had become home to “a lot of angst and rage and distress”, the then candidate for the party’s presidential nomination said: “I bring rage out. I do bring rage out. I always have. I think it was ... I don’t know if that’s an asset or a liability, but whatever it is, I do.

“I also bring great unity out, ultimately. I’ve had many occasions like this, where people have hated me more than any human being they’ve ever met. And after it’s all over, they end up being my friends. And I see that happening here.”

Four years on, with America divided as never before, that seems unlikely. The final lines of his last book may linger in the minds of many readers.

John Dowd, a lawyer who worked for the president during the Mueller investigation into Russian election interference and links between the Trump campaign and Moscow, was one of Woodward’s sources.

“In the man and his presidency Dowd had seen the tragic flaw,” Woodward wrote.

“In the political back-and-forth, the evasions, the denials, the tweeting, the obscuring, crying ‘Fake News’, the indignation, Trump had one overriding problem that Dowd knew but could not bring himself to say to the president: ‘You’re a fucking liar.’” – Guardian