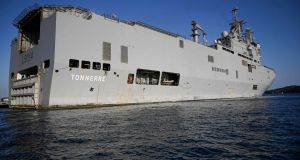 The French helicopter carrier Tonnerre is to remain in the Mediterranean. Photograph: Christophe Simon/AFP via Getty Images

Tensions between Nato allies France and Turkey have sharply intensified after Paris deployed military vessels to the eastern Mediterranean in support of Greece, which is embroiled in a confrontation with Ankara over oil and gas exploration in disputed waters off Cyprus.

Kyriakos Mitsotakis, Greece’s prime minister, warned in a television address on Wednesday night of “the risk of an accident with so many military assets gathered in an enclosed space [the eastern Mediterranean]”.

The spark that ignited the latest flare-up was Turkey’s decision to pursue its claim to possible offshore oil and gas reserves by sending the survey ship Oruc Reis into disputed waters – accompanied by Turkish warships – on an exploration mission.

France, which has already clashed with Turkey over the two countries’ support for opposing sides in the Libyan civil war, demanded that Turkey stop its “unilateral” oil and gas exploration in disputed waters.

French president Emmanuel Macron decided to “temporarily reinforce” France’s military presence “in order to better monitor the situation in this part of the Mediterranean and to ensure that international law is respected”, the Elysée Palace announced after a call between Mr Macron and Mr Mitsotakis.

Two of France’s Rafale warplanes will be based on the Greek island of Crete. It will also keep two ships in the area, the helicopter carrier Tonnerre that is taking aid to Lebanon after the fertiliser explosion at the port of Beirut, and the frigate Lafayette that has been on a naval exercise with Greece and has sailed from Larnaca in Cyprus.

In a veiled reference to France, Turkish president Recep Tayyip Erdogan said: “No foreign nation, company or ship will be allowed without permission into our maritime areas. We see provocations by a country that has no coastline in the east Mediterranean pushing Greece and the Greek Cypriot administration to take wrong steps.”

Germany said it was “very concerned about the latest tensions”. Chancellor Angela Merkel’s spokesman Steffen Seibert said Berlin was in touch with both sides, but added it was “urgently necessary” that the Turkish and Greek governments talked to each other directly.

Greece raised the stakes in a long-running dispute with Turkey over seabed drilling rights by reaching agreement with Egypt on delineating their respective maritime zones south of Crete – an area partially claimed by Turkey which signed a similar deal with Libya earlier this year.

Mr Erdogan, who has increasingly been flexing his country’s military muscles across the Mediterranean, north Africa and the Middle East, said on Thursday he would speak by phone with both Dr Merkel and Charles Michel, European Council president.

The division of the island of Cyprus between an internationally recognised EU member state and a Turkish-backed republic in the north has long poisoned relations between Athens and Ankara. Turkey is the only country in the world to recognise the self-declared Turkish Republic of Northern Cyprus.

“Turkey is not the one escalating tensions in the Mediterranean,” Mr Erdogan added. “Greece and the Greek Cypriot administration are trying to appropriate Turkish Cypriots’ hydrocarbon rights.”

Mr Mitsotakis’s hastily arranged speech came as reports circulated in Athens that a Greek navy warship shadowing the Oruc Reis almost collided with a Turkish navy vessel on Tuesday. The Greek defence ministry did not confirm the reports.

The Greek prime minister also stressed that Greece was ready to resume talks on exclusive economic zones in the area. “We are vigilantly looking forward to good sense eventually prevailing in our neighbouring country so that a dialogue can be restarted.”

The latest move by Paris, in support of calls by Greece and Cyprus for stronger EU action against Turkey, comes ahead of an extraordinary meeting of EU foreign ministers called for Friday, at which the eastern Mediterranean will top the agenda.

Sanctions imposed by the EU on Turkey over the dispute have so far been largely symbolic. EU foreign ministers last month agreed to try to lower tensions with Turkey – but also tasked Josep Borrell, the bloc’s foreign policy chief, to come up with options for action if Ankara pressed ahead with Mediterranean drilling.

Mr Borrell met Mevlut Cavusoglu, Turkish foreign minister, last week in Malta and had an “open and frank exchange on EU-Turkey relations and on the situation in the eastern Mediterranean”, according to the EU.

Mr Cavusoglu had warned last month that Turkey would retaliate if the EU imposed new sanctions on Ankara.

Other EU member states have so far resisted tougher action for fear of further damaging the already troubled relationship with Ankara, which remains important to Europe economically, on counter-terrorism and on Middle Eastern security.

France has found it similarly difficult in its push for tougher action against Turkey within the Nato military alliance. – Copyright The Financial Times Limited 2020