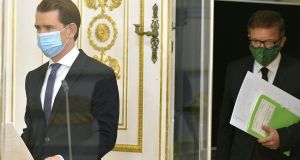 Austria is to launch a mass testing programme in an effort to trace the spread of Covid-19 and salvage Christmas, as the country enters its second hard lockdown on Tuesday.

Chancellor Sebastian Kurz announced on Saturday that Austria was shutting down almost completely until December 6th, including schools, to control the spiralling infection rate of over 550 cases per 100,000.

With only grocery and chemists open from Tuesday, Mr Kurz said mass testing on the same scale as neighbouring Slovakia would offer a path back to looser restrictions.

“We have decided here in Austria . . . to take a similar step,” said Mr Kurz. “We want to deploy mass tests at the end of the lockdown in order to enable a safe reopening in schools and other areas.”

In Slovakia, two-thirds of the population were tested, with just over 1 per cent testing positive, in a programme using antigen tests, which are faster but less reliable.

Austrian key workers such as teachers will be prioritised with millions of antigen tests on order, but the Vienna government concedes that testing Austria’s 8.8 million citizens poses a huge logistical challenge.

Mr Kurz has come under criticism after a light lockdown, imposed two weeks ago, failed to halt the virus spread. With Austria’s rate now the highest in Europe, the occupancy rate in intensive-care beds has jumped 30 per cent in a week to almost 600.

As well as a curfew from 8pm to 6am, the new lockdown requires Austrians to stay at home except for “basic needs of life”, such as food shopping, family and doctor visits and limited sport.

Ahead of their Monday meeting, the German leader presented a paper proposing shifting the country from a relatively light lockdown to tighter restrictions.

Among her proposals: restrict children’s contacts to one playmate, and require them to stay home from school with cold symptoms.

State premiers pushed back at these measures and insisted it was too soon to see if lockdown measures agreed earlier this month had worked. Instead they will meet again in a week’s time, when further restrictions are likely.

“The [latest] measures introduced have not reached their goal – we are still some way from that – but we have broken the exponential growth, that’s good news,” said Dr Merkel, urging people to stay at home where possible.

Since November 2nd, Germans can meet with members of one other household with a maximum of 10 people.

All shops are open, but schools, restaurants and bars are closed, as well as gyms, massage parlours and tattoo studios.

With 274,000 active Covid-19 cases, leaders have agreed to meet again next Wednesday with further restrictions likely.

Federal states are already setting up test and vaccination centres independent of doctors’ practices and, from December, Germany is to provide 15 subsidised medical masks each for members of at-risk groups.

Further north, Sweden has announced a ban on public events with more than eight people for a month from November 24th.

Unlike public health recommendations to date, part of Sweden’s more liberal approach to Covid-19, the new measure will be a law with fines and imprisonment for those in breach.

On Monday, 150 patients with Covid-19 were being treated in Swedish intensive-care units, a sixfold increase since the beginning of October. ”It’s going to get worse,” said Stefan Lövfen, Swedish prime minister, at a press conference. “Do your duty and take responsibility to stop the spread of infection.”