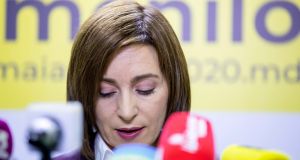 Moldova’s incoming president Maia Sandu has pledged to fight corruption and strengthen the economy while seeking good relations with Russia and the West, after she soundly beat Moscow-backed incumbent Igor Dodon in an election run-off.

Ms Sandu, who studied at Harvard in the US before working at the World Bank and briefly serving as Moldova’s prime minister, will become the country’s first female head of state having taken 58 per cent to Mr Dodon’s 42 per cent in Sunday’s vote.

Her surprisingly comfortable win was a setback for Moscow, which publicly favoured Mr Dodon. Yet Ms Sandu struck a conciliatory note in calling for unity to fight the poverty and graft that drive so many Moldovans to seek work abroad.

“The presidency for me is not an award or a privilege. It is a great responsibility...The vote of the people gives the real power needed to change things. And there are many things to change,” Ms Sandu (48) said on Monday.

Ms Sandu said she wanted “to stop the theft of public money, to stop corruption schemes and to attract resources for Moldova’s economy to prosper” while helping those hit hardest by the coronavirus pandemic.

Switching to Russian in a gesture to Mr Dodon’s support base, Ms Sandu assured his voters that “you did not lose. I will try to win your trust with concrete actions. We will build a genuine balance in foreign policy, based on the national interests of Moldova and pragmatic dialogue with all countries, including...European countries, Russia and the United States. ”

Mr Dodon said he wanted alleged vote fraud to be investigated, but admitted that Ms Sandu seemed to have won and told his supporters not to protest.

Russian president Vladimir Putin told Mr Dodon in September that he hoped they would continue to work together after the election, and Moscow’s foreign intelligence chief Sergei Naryshkin claimed last month that the US planned to stage a revolution to oust the Moldovan leader.

Mr Putin congratulated Ms Sandu on Monday, however, and said he hoped her presidency would be good for bilateral relations.

Russia is Moldova’s main energy supplier and has troops stationed in Transdniestria, a breakaway region of the country run by Moscow-backed separatists since a war in the 1990s.

Ms Sandu wants to move Moldova towards EU membership, and European Commission president Ursula von der Leyen said: “Your victory is a clear call to tackle corruption and restore respect for the rule of law – the path to a prosperous future. The EU is ready to support Moldova.”