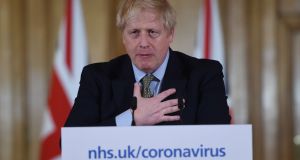 Boris Johnson’s allies have insisted that the British prime minister will continue to drive the political agenda despite being forced to self-isolate after attending a meeting with an MP who tested positive for coronavirus.

Twelve Conservative MPs, including Mr Johnson, are self-isolating after Lee Anderson, who won the Nottinghamshire seat of Ashfield from Labour last December, found out he had been infected.

Mr Ashfield was among 15 MPs who attended a breakfast meeting with the prime minister in Downing Street last Thursday. Mr Johnson’s official spokesman said everyone at the meeting had followed social distancing guidelines.

“Social distancing was observed at the meeting. It is also the case that No 10 is a Covid-secure workplace. We take every possible step to ensure that hand sanitiser is made available to people as soon as they arrive at the building and it is available throughout the building as you travel through it,” the spokesman said.

Mr Johnson will take prime minister’s questions by video on Wednesday and health secretary Matt Hancock said his self-isolation would not affect his ability to engage with the final stages of negotiations with the European Union over the next two weeks.

“If the prime minister needs to speak to anybody in Europe, he will be able to do that by Zoom. He will be driving forward the agenda in the way he normally does,” he said.

Mr Hancock was speaking at a coronavirus press conference in Downing Street during which he said that a further 168 deaths had been recorded in Britain as cases continue to soar.

Susan Hopkins, a deputy director of Public Health England, said the impact of the lockdown on the number of infections should be apparent next week.

She suggested that when the lockdown ends next month, England might have to return to tougher restrictions than under the three-tier system until now.

“We see very little effect from tier one. And I think when we look at what tiers may be there in the future, we will have to think about strengthening them in order to get us through the winter months until the vaccine’s available for everyone,” she said.

“We expect if the lockdown is working, and we’re all doing the best we can to have reduced or no social contact with other people that we will start to see cases decline over the next week.”

Mr Johnson had hoped to use a series of speeches and announcements to signal a fresh start for his government following the turmoil last week that saw his senior aides Dominic Cummings and Lee Cain leave Downing Street.

Amid reports that he plans to move away from the combative style of the past year, the prime minister on Monday spoke with Conservative MPs from the North of England to reassure them that he would not abandon his “levelling up” agenda.

Jake Berry, who chairs the so-called Northern Research Group of Conservative MPs, said before the meeting that the places they represent needed a clear route out of lockdown.

“Many northern communities have been in some form of lockdown since March, with no time off for good behaviour. We need a way out of lockdown for northern people in northern businesses,” he said.