Covid-19: Sweden to limit public gatherings to eight people amid surge in cases 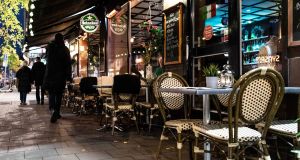 Sweden has cut its limit on attendance at public gatherings to eight people, as its light-touch approach to the coronavirus pandemic continues to be tested by a surge in new infections and hospitalisations.

Public gatherings have until now had to adhere to limits of between 50 and 300 people depending on the type of event. Sweden’s prime minister Stefan Lofven said the new, stricter limit would come into force from November 24th.

“This is the new norm for the entire society,” Mr Lofven said, adding that Swedes were not observing coronavirus recommendations as well as they had in spring. “Don’t go to gyms, don’t go to libraries, don’t host dinners. Cancel,” he said.

Sweden’s second wave of Covid-19 has come later than in much of continental Europe, but new infections, hospitalisations and daily deaths have all risen substantially since the beginning of the month.

On Friday, the last day for which data is available, Sweden reported its highest daily number of new cases, 5,990, bringing its total number of confirmed cases to 177,355 with 6,164 deaths – a far higher per-capita toll than those of its Nordic neighbours, but lower than some countries such as Spain and Italy that imposed strict lockdowns.

Sweden’s light-touch approach, which has largely focused on asking rather than ordering residents to observe hygiene and distancing recommendations while keeping shops, bars and restaurants open, has gained international attention.

It has always denied its aim was to achieve rapid herd immunity, insisting its strategy was to slow the virus enough for health services to cope, but the higher levels of immunity it was expecting have so far failed to materialise.

The new limit applies only to public gatherings such as sporting and cultural events, as the government cannot ban private gatherings in homes. Restaurants will stay open, with a maximum of eight diners for each table, as will schools.

“It’s going to get worse,” Mr Lofven said. “Do your duty and take responsibility for stopping the spread of the virus. In the spring we saw large compliance. It was enough to have recommendations to get most people to keep their distance and cancel their plans. Now there is less compliance.”

The prime minister reiterated that the government “does not believe in a total lockdown. We believe that the measures we have taken . . . are appropriate.”

Last week the Swedish government announced that bars and restaurants would not be allowed to serve alcohol after 10pm from November 20th until the end of February.

The interior minister, Mikael Damberg, said the strict new limit on gatherings would be in place for an initial four weeks but could be extended to run over the Christmas and New Year period. – Guardian