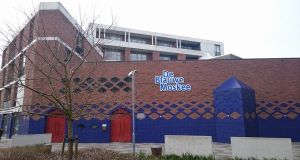 Blue mosque: imam Yassin Elforkani says his request for the call to prayer was “to normalise Islam in this beautiful world city”.

In a 21st-century answer to a proposal with its roots in the seventh century, Amsterdam has rejected a plan by a prominent mosque to become the first in the city to broadcast its call to prayer over loudspeakers – on the grounds that it’s unnecessary in a world of mobile apps.

In a response that’s unlikely to be appreciated by the Muslim community, the mayor of the Dutch capital, Femke Halsema, said that given advances in technology, from alarms to apps, it was not necessary to use loudspeakers to remind the faithful when to pray.

The amplification of the call to prayer, Ms Halsema said, was fundamentally “not of this time” – a phrase widely described in the Dutch media on Wednesday as perhaps betraying a lack of sensitivity in relation to her view of Muslim tradition.

The plan to broadcast the call has been championed by Yassin Elforkani, the imam at the blue mosque, who says that rather than an attempt to provoke – as Geert Wilders’ far-right Freedom Party has claimed – it’s an effort “to normalise Islam in this beautiful world city”.

While the imam acknowledged that for some members of the public the phrase “Allahu akbar” was associated with violence as a result of international terrorism, he said that for those who visited his mosque it was part of the prayer ritual and an aid to meditation.

He argued that allowing the call to be broadcast would be an important reassurance to Muslims following the introduction of the burka ban in August which had sparked a debate about their rights as Dutch citizens, adding: “Amsterdam is a tolerant city, right?”

Some cities and town in the Netherlands allow the call to prayer to be broadcast, but it’s rare. It applies in just over 7 per cent of the country’s 475 mosques – somewhere between 33 and 38 locations – according to political scientist Roemer van Oordt.

In Utrecht, for example, the Ulu Mosque is one of the few allowed to broadcast one call daily. However, in Leerdam, half-an-hour away, the mosque is restricted to one “amplified” call a week, for four minutes, before Friday prayers.

Under Dutch law, the call to prayer has the same status as church bells: they are not prohibited but are subject to local restrictions, such as time of day, duration and volume.