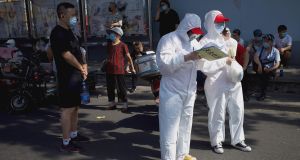 Medical staff members in full protective gear stand outside a sports centre to assist people who live near or who have visited the Xinfadi Market, a wholesale food market where a new coronavirus cluster has emerged, for testing in Beijing on Tuesday. Photograph: Noel Celis/AFP

More than 8.1 million people have been reported to be infected by coronavirus globally and more than 444,100 have died, according to data provided by Johns Hopkins University. The following are the latest coronavirus updates from around the world:

China’s capital has raised its emergency level as dozens of new coronavirus cases emerged and residents were barred from any “unessential” travel outside Beijing following a new outbreak of the virus that is yet to be brought under control.

Hundreds of flights were cancelled, schools suspended and all residential compounds ordered to reinstate strict screening after authorities raised the city’s four-tiered Covid emergency response level from three to two on Tuesday evening. All movement in and out of the city will be “strictly controlled”, officials said at the briefing.

Authorities reported 31 new cases of the virus in Beijing as of Tuesday, bringing the total number of infections to 137 over the past six days.

The new outbreak, linked to a sprawling wholesale food market in the south-eastern district of Fengtai, has spread to nine of the city’s 17 districts. On Tuesday, at least 1,255 inbound and outbound flights were cancelled, according to state media.

Officials stopped short of ordering businesses and factories to shut under the new emergency level, which had been lowered just two weeks ago. Authorities called on employers to continue regular operations but encourage remote working and ask employees to stagger their arrivals at work.

All primary and secondary schools were ordered to stop attending classes on Tuesday, while kindergartens and universities were also suspended. Officials also ordered that traffic to parks as well as indoor public spaces like museums and libraries be limited.

The Xinfadi seafood market, which also sold produce and meat, as well as two other markets in nearby districts have been shut after newly confirmed cases. Twenty-seven neighbourhoods have been designated as medium risk and instituted temperature checks and registration while neighbourhood near the Xinfadi market has been deemed high risk and sealed off, with residents ordered to quarantine at home and undergo tests for the virus.

Cases in Hebei, Liaoning, Sichuan and Zhejiang provinces have been linked to the cluster in Beijing, prompting other cities to impose quarantine measures on travellers from Beijing. As of Tuesday, Macau is requiring all arrivals from Beijing to undergo 14 days of medical observation. Residents in Beijing from medium or high-risk areas are now allowed to leave the capital while those from other districts must complete a test for the virus within seven days of their departure.

The new outbreak comes just as the country was returning to normal after largely containing the virus. Before the new outbreak, the capital - which had imposed strict travel restrictions and quarantine measures - had not seen a new domestic case in almost two months.

Prime minister Jacinda Ardern said the releasing of two women from quarantine before they were tested for Covid-19 was “unacceptable”. The women, who are New Zealand citizens, had flown from London to visit a dying parent and were granted an exemption to leave their mandatory 14-day quarantine early on compassionate grounds. They then travelled by car from Auckland to Wellington, where they tested positive for coronavirus. Ms Ardern has assigned a top military leader to oversee the nation’s border quarantine measures after the “unacceptable failure”. Officials said they are contacting 320 people who may have come into contact with the women on their flight or in the hotel they stayed at during their time in quarantine. Before the two new cases were announced on Tuesday, New Zealand had gone more than three weeks without reporting any new cases and was considered virus-free.

Australia is unlikely to reopen its border to international travellers until next year but will look to relax entry rules for students and other long-term visitors, trade minister Simon Birmingham said on Wednesday. Australia has been largely successful in containing the spread of the novel coronavirus, which it attributes to curbs on international travel and tough social-distancing rules. Mr Birmingham said a quarantine rule for returning citizens could be applied to international students and other visitors who plan to stay for a long period of time. Australia has had more than 7,300 cases of the coronavirus and 102 people have died from Covid-19, the disease it causes.

Germany will extend a ban on large events until at least the end of October to try to avoid a new wave of coronavirus infections, chancellor Angela Merkel said on Wednesday.

After speaking with the premiers of Germany’s 16 states, she urged people to remain cautious and maintain social distancing. But she also said the number of new infections had stabilised at a low level.

Germany has managed to keep its Covid-19 death toll relatively low despite a high number of cases, confirmed through widespread testing. On Wednesday it reported 345 new cases over the previous day and 30 deaths.

A nationwide shutdown begun in mid-March has already been eased, with shops, factories, schools and restaurants reopening.

Dr Merkel and the premiers agreed that large events, where contact tracing and distancing were not possible, should be banned at least until the end of October, a government document showed.

Protests and demonstrations will continue to be allowed, but the document said authorities must take steps to reduce the infection risks there.

Deaths in Sweden from Covid-19 passed 5,000 on Wednesday, its public health agency said, far more than in neighbouring Nordic countries.

Sweden has taken a softer approach to fighting Covid-19, leaving most schools, shops and restaurants open and relying on voluntary measures focused on social distancing and good hygiene.

Residents of Moscow were able to return to museums and summer terraces for the first time in more than two months as the Russian capital rolled back curbs despite continuing to record over 1,000 new daily infections. Russian president Vladimir Putin is protected from the novel coronavirus by a special disinfection tunnel that anyone visiting his residence outside Moscow must pass through, RIA news agency reported. Russia has registered 7,478 deaths so far – fewer than numerous other countries. Critics are dubious about the accuracy of its mortality figures.

Spain’s prime minister Pedro Sanchez said a state ceremony will be held on July 16th to honour more than 27,000 people who have died in the pandemic. Spain has had more than 244,000 confirmed cases. Although daily deaths are believed to have dropped to a single digit, the government has kept the fatality toll at 27,136 for two weeks as it revises inconsistencies on reporting from different regional authorities.

The number of people who died from coronavirus infection in France rose by 28 to 29,575 on Wednesday, down sharply versus Tuesday when the weekly data for nursing homes were included.

New coronavirus infections hit record highs in six US states on Tuesday (Arizona, Florida, Oklahoma, Oregon, Texas, Nevada) marking a rising tide of cases for a second consecutive week as most states moved forward with reopening their economies. The Trump administration said it would extend existing restrictions on non-essential travel at land ports of entry with Canada and Mexico.

Honduran president Juan Orlando Hernandez said he had been diagnosed with the novel coronavirus, is receiving treatment and will work remotely and through his aides.

Mexico went into the coronavirus outbreak insisting it would beat the pandemic without mass testing, but with deaths surging as it prepares to exit lockdown, the strategy looks increasingly untenable. Mexico will stop sending temporary workers to Canadian farms that have registered a coronavirus outbreak and that do not have proper worker protections, the labour ministry said.

Brazil reported a record 34,918 new coronavirus cases on Tuesday, the same day that one of the senior officials leading the country’s widely criticized response to the crisis said the outbreak was under control. Brazil, the world’s second coronavirus hotspot after the United States, is fast approaching 1 million cases, although experts say the true number is likely higher due to patchy testing. Brazil also registered 1,282 Covid-19 deaths since its last update on Monday, the health ministry said, bringing confirmed fatalities in the country to 45,241.

India – which has the fourth-highest caseload after the US, Brazil and Russia – added more than 2,000 deaths to its tally, after Delhi and Maharashtra states included 1,672 previously unreported fatalities. Its death toll of 11,903 is now eighth in the world. India has been reporting 10,000 new infections and more than 300 deaths each day over the last two weeks. Adding the previously unreported deaths drove the fatality rate from 2.9 per cent to 3.4 per cent.–PA, Guardian, Reuters, Bloomberg