Covid-19: Why science has been overtaken by economics 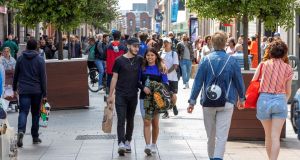 Lockdown lifts in central Dublin: 300,000 may be left jobless once the Government removes its income support schemes. Photograph: Paul Faith/AFP

An open letter to the Government from 1,000 scientists, disease experts and academics calling for a rethink on Ireland’s Covid-19 strategy should have set the proverbial cat among the pigeons.

The so-called “Crush the Curve Petition”, published last week, not only challenged government policy but warned the country risked falling back into lockdown if it didn’t implement tighter restrictions and effectively slow down the unwind.

But as we journalists like to say about stories that fail to ignite the public’s imagination, it rose without trace. There are several possible reasons for this. First, the message wasn’t exactly clear. While acknowledging the containment measures deployed to date, the letter claimed that our current strategy of long-term mitigation, getting cases as near to zero as possible but not necessarily to zero, comes with “a risk of future surges and lockdowns until when, or if, a vaccine becomes available”.

A better option, economically and socially, it claimed, would be to eliminate the virus via tighter restrictions and a more aggressive testing and tracing system.

But surely the possibility of a resurgence is implicit in any strategy pending the discovery of a vaccine. Is elimination even possible with a vaccine? Who’s to say that after a period of zero cases we won’t be hit by a fresh outbreak?

New Zealand this week recorded its first new cases of the virus after reporting zero cases for 24 straight days. China is also dealing with a new cluster of infections in Beijing possibly linked to imports or packaging of salmon. It’s impossible to think Ireland won’t experience these mini flare-ups regardless of how fast or slow we move out of lockdown. And as for establishing a more aggressive testing and tracing structure, isn’t that assumed in every strategy from here on in?

In a radio interview, lead signatory Prof Anthony Staines of Dublin City University kept citing New Zealand as the exemplar, but surely a country 4,100km away from its nearest neighbour, Australia, enjoys certain unique advantages in terms of limiting its exposure to a pandemic.

The fresh incidence of cases in New Zealand was linked to two women travelling from the UK. Without aviation, the virus may have never left China in the first place. It’s the ultimate vector besides us humans. It may explain why the mega aviation hubs of London and New York proved so vulnerable in the first place. Aviation poses perhaps the chief risk, not least because different parts of the world are at different stages of the disease cycle.

Ireland’s vulnerability is also elevated by the fact that we are two jurisdictions with largely unco-ordinated health policies and at different stages of lockdown. None of this is to suggest that the advice in the letter is wrong or not well-intentioned. On health grounds, fastening the lid tighter is preferable.

But the science has been overtaken by economics. This was always going to happen once the initial wave subsided. The pendulum has swung the other way.

With a handful of cases being reported each day, the threat of mass unemployment and mass business closures is now what’s stoking fear inside the Government. Official estimates anticipate about 300,000 people will be left jobless after the economy reopens and the Government removes its income support schemes. There was always a trade-off between health and economics, lives and livelihoods, despite claims that this was a false dichotomy. And 300,000 is the nearest we’ll get to putting a price on it.

The Government has also been under intense pressure from business to lift the lockdown faster. Employer group Ibec claims it is being overly cautious in its approach to lifting restrictions, and that Ireland is about six to eight weeks behind continental Europe. This was almost certainly why Taoiseach Leo Varadkar earlier this month announced a fast-tracking of his original five-phase reopening plan.

And then there is the public. The socially responsible gusto with which we started the lockdown has given way to a mixture of fatigue and frustration. Discipline has dissolved. Traffic and busy streets have replaced the zombie apocalypse of late March and early April when people battened down the hatches and stayed at home. The number of contacts identified by people diagnosed with Covid-19 has been rising since restrictions were eased three weeks ago and has now almost doubled, according to recent Health Service Executive data.

The median number of contacts per diagnosis has risen to close to 3.5 per person in the weeks since May 18th, compared with an average of two per person when full restrictions were in place.

In one case diagnosed earlier this month, the individual named a total of 25 contacts, a level not seen since the early stages of contact tracing last March. It may be that we now need to go back to work to social distance.

In the public’s eyes, the Government has got much of its Covid-19 policy right. That surely is the only reasonable explanation for Fine Gael’s bounce in the polls. Support for the party increased by 17 per cent in latest Irish Times/Ipsos MRBI opinion poll. It might also be reasonable to assume that the public is behind the Government’s reopening plan or at least not open to calls for a pullback even if it comes from well-intentioned scientists.