US retail sales post record resurgence in May as 2.5m return to work 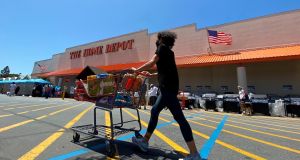 A shopper wearing a mask in Marina Del Rey, California. US retail sales posted a surprise spike of 17.7% in May, nearly double what analysts had forecast. Photograph: Getty Images

US retail sales experienced a record rise in May as 2.5 million Americans went back to work and people began moving about more freely, although the rebound retraces only a fraction of the historic drops in March and April amid the coronavirus lockdowns.

The US commerce department on Tuesday said overall retail receipts rose 17.7 per cent last month after falling by a record 14.7 per cent in April.

The gain exceeded the previous record increase of 6.7 per cent in October 2001 as Americans resumed spending following what was then a record pullback in the aftermath of the September 11th, 2001, attacks on the US.

Retail sales had been expected to jump 8.0 per cent last month, according to a Reuters poll of economists.

While certainly an eye-catching bounce, it retraces only a portion of the sales drop registered in the record back-to-back declines in the two previous months when widespread stay-at-home orders were imposed to stop the spread of Covid-19. In addition to April’s record plunge, sales had tumbled more than 8 per cent in March.

The US economy dropped into recession in February as the viral outbreak brought a record-long expansion to an abrupt end. Employment fell by about 22 million in March and April, but payrolls rose unexpectedly in May by just over 2.5 million, supporting the thesis that consumer spending may be recovering and that the worst of the downturn may have passed.

The sales rebound was helped by strong car sales as the relaxing of lockdowns across the country allowed dealership showrooms to reopen. May’s sales rate climbed above 12 million vehicles per year after dropping below 9 million in April, according to Wards Intelligence.

The closely watched “retail control” figure, which further excludes building materials, food services and gasoline sales as well as setting aside automotive-related sales, rose by a record 11.0 per cent, the report showed. Economists had been expecting the figure, which most closely tracks the consumer spending component of gross domestic product, to see a gain of 4.7 per cent. – Reuters