Kosovo says US, not EU, now leading push for deal with Serbia 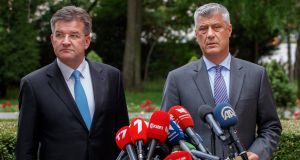 Kosovo has said the United States rather than the European Union is now leading international efforts to help normalise its relations with Serbia, after Washington announced it would host a summit on the issue later this month.

Serbia rejects its former province’s 2008 declaration of independence, and several years of EU-brokered talks to resolve the dispute broke down in late 2018, when Pristina imposed a 100 per cent tariff on Serbian imports in response to Belgrade’s international lobbying against recognition of Kosovo’s sovereignty.

The US has stepped into the gap, and White House envoy to the Belgrade-Pristina dialogue Richard Grenell has kick-started talks in what many analysts see as a bid to clinch a historic deal during US president Donald Trump’s re-election campaign this year.

Mr Grenell announced on Monday night that the White House would host talks between the Balkan neighbours on June 27th, in a surprise move that was welcomed by Kosovo’s president Hashim Thaci and Serbian counterpart Aleksandar Vucic.

“Kosovo has always trusted the US and has come out victorious,” said Mr Thaci, who was a leader of Kosovo’s ethnic Albanian rebels in their 1998-9 war with Serbian forces. “This time the US has taken the leadership role, which we welcome.

“Kosovo’s future is secure only when it is part of a concrete European perspective. We will work in that direction together with the United States in order to move towards a comprehensive agreement as soon as possible,” he added, after talks in Pristina with Miroslav Lajcak, the EU’s special envoy for Balkan issues.

Mr Thaci expressed frustration over the EU’s failure to lift visa restrictions for Kosovo’s citizens, some two years after Brussels said it had met all the conditions, and he has previously questioned Mr Lajcak’s suitability as Balkan envoy given that his native Slovakia is one of five EU states that do not recognise Kosovo’s independence.

He is much more enthusiastic about the role of Mr Grenell, who says he wants to foster closer economic ties between Serbia and Kosovo to lay a foundation for political progress, and denies he is forcing the pace of negotiations.

“Strongly urge all to join the process and help all of us – and the region, in achieving a long lasting, final settlement between Kosovo and Serbia,” Mr Thaci tweeted after the White House talks were announced. He also insisted there was “no backroom dealing . . . no secret plan”, amid concern that he and Mr Vucic are willing to discuss exchanging territory and redrawing borders to reach a deal – a move critics say could destabilise the Balkans.

“Everything that has been achieved in the dialogue was the result of the very close and joint work of the EU and the US,” Mr Lajcak said in Pristina, “and this is exactly our ambition to continue”.