Coronavirus: Fauci calls for action to prevent ‘surge’ in US

Warning as Texas, Florida and Arizona all report biggest one-day increases in cases 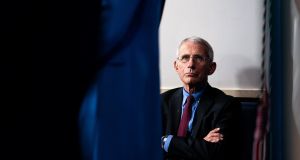 Dr Anthony Fauci: “All you need to do is look at the data, the facts, to see that the pandemic is not over by any means. The numbers speak for themselves.” Photograph: Erin Schaff/The New York Times

Anthony Fauci, a leading member of the White House coronavirus task force, has urged states including Arizona, Texas and Florida to move aggressively to prevent recent increases in cases from turning into “a real surge”.

The director of the National Institute of Allergy and Infectious Diseases issued his call after US vice-president Mike Pence, head of the task force, played down the possibility of a “second wave” of Covid-19 cases, saying in a Wall Street Journal column that “such panic is overblown”.

Dr Fauci said states where cases have ticked up could prevent surges by employing “the recommended manpower” to identify people with the disease, isolate them and trace their contacts. He said this capacity was “variable” among the states but better than it was a month or two ago.

“We are concerned about it but hopefully we can prevent individual blips we are seeing becoming a real surge,” he told the Financial Times. “The critical issue is how we handle and respond to the increases in cases.”

The Covid Tracking Project reported on Tuesday that 23,498 people in the US had tested positive for coronavirus since Monday. Texas (4,098 cases), Florida (2,783 cases) and Arizona (2,392 cases) all reported their biggest one-day increases. California came next with 2,108 cases.

“All you need to do is look at the data, the facts, to see that the pandemic is not over by any means. The numbers speak for themselves,” said Dr Fauci.

He added that a panel of US experts was now reviewing whether to recommend the drug dexamethasone after an Oxford trial found the generic steroids cut the death rate of the most seriously ill Covid-19 patients by a third.

He called the results “important” and “positive”, saying the drug “clearly has a significant effect on those individuals who are on ventilators”. He said it was “less impressive” yet significant for patients who were less sick.

Dr Fauci added it was important the study was a large, randomised control trial that compared the drug with a placebo. Alongside the positive result from Gilead’s antiviral remdesivir, he said these were signs that “we are making progress”.

In Washington, Dr Fauci said, the White House coronavirus task force was meeting about twice a week – up from a period where it had been meeting less regularly.

The US continues to evaluate whether to lift restrictions on travellers from Europe and elsewhere, he said, but added it was “tough to predict when that change will be made”.

Dr Fauci also addressed concerns raised by public health experts that large public events could lead to an increase in cases, while avoiding comment on specific gatherings – such as President Donald Trump’s planned rally in Tulsa, Oklahoma, on Saturday.

“When you congregate in crowds that increases the risk of transmissibility, without referring to any specific event,” Dr Fauci said. “If you feel you have to do it, it is important to wear a mask and keep it on at all times.” – Copyright The Financial Times Limited 2020