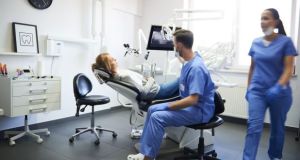 Medical and dental workers are among those who rated themselves as being most exposed to Covid-19.

Doctors, nurses and dentists feel they are most at risk of being infected with Covid-19, while artists and farm machinery drivers consider themselves at the least risk, new data shows.

In an analysis of occupations with potential exposure to the virus, the Central Statistics Office found that people working in retail and farming - the two largest occupational groups in the country - considered themselves at low risk of exposure to the disease.

Medical and dental workers are among those who rated themselves as being most exposed to the disease followed by nurses and midwives as the second-highest ranked group for exposure.

Computer programmer and software developers were among the workers who considered themselves as “never being exposed to disease while at work”, the CSO said.

Waiting and bar staff rated themselves as working in similar proximity to others but waiting staff felt they have a higher rate of exposure to the coronavirus disease.

Professionals such as advertising executives along with laundry workers and dry cleaners said that they generally do not work close to people and are rarely exposed to diseases.

The CSO found that there was in general a correlation between working in proximity to others and increased exposure to the disease.

The data reflects international trends showing healthcare workers as being amongst those considered most at risk from contracting the coronavirus disease.

Almost a third of the Covid-19 cases confirmed in the State have been healthcare workers.

Of more than 25,303 known cases of the disease as of last Saturday, some 8,130 or 32 per cent were healthcare workers, according to the Health Protection Surveillance Centre.