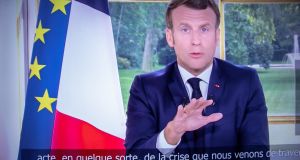 French president Emmanuel Macron in a televised address: Paris cafés and restaurants will be allowed to resume normal service, including indoors, on Monday. Photograph: Thomas Samson/AFP via Getty Images

France “is turning the page” of the lockdown declared three months ago, President Emmanuel Macron said in a televised address on Sunday night. From Monday, normal life will resume throughout the country, with the exception of the overseas territories of Mayotte and Guyana.

Paris cafés and restaurants will be allowed to resume normal service, including indoors. The capital was subjected to greater restrictions than the rest of the country, because it was worse affected by the Covid-19 epidemic.

Freedom to travel has been restored within Europe, with the exception of a few countries, including Ireland, which impose quarantine regulations. Mr Macron said that from July 1st, the French will be able to visit countries outside the EU where the epidemic is under control.

School attendance will be obligatory starting June 22nd. The second round of municipal elections which started in March will take place on June 28th. Visits to care homes are again authorised.

“We are going to resume our art of living, our taste for freedom. In summary, we will find again what it means to be French,” Mr Macron said.

The only exception was large gatherings, “the main source of the propagation of the virus”, which will remain “very restricted”.

France has in recent days seen a wave of unauthorised demonstrations against racism and police brutality. Mr Macron said he will be intransigent against racism, but will not allow “this noble combat to transform itself into sectarianism or a hateful rewriting of the past”.

The virus has not disappeared, Mr Macron cautioned. “We cannot totally let our guard down. We will have to live with it for a long time, respect the rules of physical distance... prepare ourselves in the event it comes back stronger.”

But France had won “a first victory” over the pandemic, Mr Macron said. When the lockdown started, “we made the humanist choice to place health above the economy”.

The French leader said he received contradictory advice, including from scientists, on the gradual reopening that started on May 11th. “We were right,” he added. “Tens of thousands of lives were saved by our choices, through our actions.”

Despite the fact that France was “hit earlier and harder than many others... we were able to be inventive, reactive, solid”.

Mr Macron admitted that the crisis has “revealed fault lines, fragilities, our dependency on other continents for certain products, cumbersome organisation, inequality”.

Germany was widely credited in French media with managing the epidemic better than France. Mr Macron said he wanted “to draw lessons from what we have lived through, and understand what we did better or less well than our neighbours”.

France’s first priority will be “to rebuild a strong, ecological and sovereign economy of solidarity” Mr Macron said. He noted that the state is spending €500 billion in aid for the automobile, aeronautics, tourism, restaurant and hotel sectors, and for culture. That amount includes salaries for furloughed workers, loans for struggling businesses and payments to the disadvantaged.

“This is unprecedented,” Mr Macron said. “I want you to fully recognise it. How many countries did this? It shows the strength of our state and our social model.”

Voices on the left are calling for tax hikes for the rich, but Mr Macron excluded that option, saying French taxes are already among the highest in the world. “The only answer is to build a stronger, lasting economic model, to work and produce more,” he said.

France “will do the maximum” to avoid redundancies, Mr Macron promised. He advocated a “productive pact” which will create new jobs in research, in industries repatriated from abroad, and in green technology.

The French president also promised new investment in the health sector, and in education and job training for the young.

The economy of Europe “is at a historic turning point”, Mr Macron said, vaunting the Franco-German joint proposal for a recovery fund based on mutualised debt. For the first time, “European states are saying ‘we’ instead of ‘I’”. The fund was the result of a French initiative, and marked an important step towards “an independent Europe that gives itself the means to affirm its identity and culture, its uniqueness compared to China, the US and global disorder”.