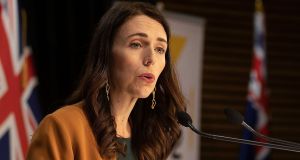 The New Zealand prime minister, Jacinda Ardern, has branded as an “unacceptable failure” a quarantine blunder that meant two arrivals from Britain left managed isolation in New Zealand without being tested for the coronavirus – which they were later diagnosed with.

“It should never have happened and it cannot be repeated,” Ms Ardern said on Wednesday, adding that the defence force would now oversee the quarantine of new arrivals and audit the quarantine process.

Ms Ardern also said she would temporarily remove the compassionate exemption under which the pair, who are New Zealand nationals, were released from quarantine early.

Health officials are tracing 320 people who are regarded as “close contacts” of the women, and they will be urged to get tested. Close contacts could include passengers on their flight to New Zealand and other quarantined travellers at their Auckland hotel, as well as hotel staff and flight crew. The women were now in isolation with a relative, officials said.

Ms Ardern said the new cases did not change New Zealand’s Covid-free status. “Our definition always assumed there would be cases at the border,” she said.

The government is still scrambling for answers about why two women had not been tested before being allowed to leave an Auckland hotel after they arrived from the UK on June 7th. They had received a compassionate exemption to the compulsory 14-day isolation period for returning travellers in order to visit a dying relative 650km away in Wellington. The compassionate dispensation policy has been suspended.

It was “absolutely nonsensical” that the women had not been tested, Ms Ardern said.

Earlier, Todd Muller, the country’s opposition leader, decried the failure as “clumsy and totally inappropriate”. “I’m as furious as I suspect most New Zealanders are this morning,” said the leader of the centre-right National party, in a Radio New Zealand interview. “We have systems in place that we expect to be followed and they simply weren’t.”

Only New Zealanders, their families, and essential workers are currently permitted to enter the country, which has no other domestic restrictions in place due to the nation’s success at quashing the spread of Covid-19. New arrivals are supposed to remain in managed isolation for 14 days, during which they should be tested twice for the virus.

The government had earlier faced complaints that it was callous to deny people the chance to visit dying relatives.

On Wednesday, Ms Ardern said the dispensations would be halted until a “disciplined and rigorous” process was in place to manage them, even though the move would be “upsetting” to some New Zealanders.

“I cannot allow the gains we have all made to be squandered by processes not being upheld,” she said. Ms Ardern added that the government had come under pressure from many quarters, “including the courts” to relax the quarantine rules. “It may be a hard and unpopular decision to take, but it is the right one for the country,” she said.

The two new cases came a week after the country celebrated being free of the coronavirus when the last remaining sufferer recovered, and the government lifted all restrictions on daily life, leaving only strict border controls in place.

The women made the eight-hour drive in a private vehicle on June 13 th before one of the women developed symptoms of Covid-19 and both were diagnosed.

New Zealand’s government drew international praise for a swift and stringent lockdown that appeared to have quashed the virus, with fewer than 1,500 confirmed cases and 22 deaths since it arrived on New Zealand’s shores. But scientists said the fresh diagnoses showed how easily a “second wave” of infection could spread.

“These two new cases illustrate very vividly how quickly rules and guidelines can unravel when they collide with real life,” said Amanda Kvalsvig, an epidemiologist at the University of Otago, Wellington. She added that such a situation could “so easily” trigger an outbreak that would set the country back.

“We’re now in a situation where potentially hundreds of people have travelled for several hours in an enclosed space with someone who was infectious,” she said. “There is an enormous amount of ‘mopping up’ to do to make sure that all potential transmission chains have been extinguished.”

It was not clear what led to the error, but some staying in managed isolation at the same hotel have told reporters that they were not tested during their stay – or even upon leaving. It was also not known whether others were granted compassionate exemptions to quarantine without being tested.

The health ministry did not respond to written questions from the Guardian about whether officials planned to recall others for testing, or how many returning travellers might not have been swabbed before they left isolation.

Dr Ashley Bloomfield, the country’s top health official, on Tuesday sought to minimise concerns that the women might have caused community transmission, saying he was “not nervous” given they had “done everything right”.

Mr Clark was asked on Wednesday why officials had not ascertained that one of the women had been suffering from Covid-19 symptoms before she left quarantine. “As I understand it the woman had a pre-existing condition, something that meant that what she was experiencing was something she expected to experience,” he said. – Guardian