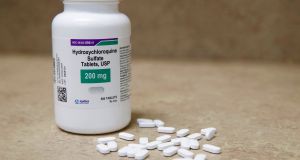 A bottle and pills of hydroxychloroquine sit on a counter at a pharmacy in Provo, Utah. Photograph: George Frey/AFP via Getty Images

A study that said a malaria drug backed by President Donald Trump to treat and prevent coronavirus raised the risk of heart side effects and death has been retracted by the authors.

The study was published on May 22nd in the prestigious UK medical journal the Lancet. Questions soon arose about the accuracy of the underlying data, said researchers led by Mandeep Mehra, the medical director of Brigham and Women’s Hospital Heart and Vascular Center, in the retraction note published by the journal on Thursday.

While the company that produced the original data, Surgisphere Corp, had signalled that it would cooperate with an independent review, it ultimately reneged and said doing so would violate confidentiality agreements, wrote the study authors.

“As such, our reviewers were not able to conduct an independent and private peer review,” the authors said.

“We all entered this collaboration to contribute in good faith and at a time of great need during the Covid-19 pandemic,” the authors said.

“We deeply apologize to you, the editors, and the journal readership for any embarrassment or inconvenience that this may have caused.”

The retraction is the latest turn for a drug that has been followed by controversy since Mr Trump took it up as a possible coronavirus treatment earlier this year. Repeated efforts have been launched to study the drug and whether it might be used as a therapy for patients with the disease or as a preventive. So far, the results have been largely negative.

One large study published this week examining the drug’s use as a preventive showed that it didn’t stop at-risk people from being infected by the coronavirus.

Controversy has also grown around Surgisphere, a Chicago-based medical data company that says it consolidates medical records from around the world. The company’s data was used in another major study of heart drugs called ACE inhibitors, and what impact their use might have on Covid-19 patients. On Wednesday, the New England Journal of Medicine, where the study was published, issued an “expression of concern” about the May 1st research. The journal didn’t immediately respond to a request for comment on Thursday about whether the authors of that study might also retract their work.

On Wednesday, Surgisphere CEO Sapan Desai said in an emailed statement that the company “stands behind the integrity of our studies.” Following the retraction, the company said that Mr Desai was “unavailable to make any further public comment at this time.”

On Wednesday, the World Health Organisation (WHO) said an international trial using hydroxychloroquine to treat Covid-19 patients would be restarted after questions arose about the study.

The WHO said it would resume recruiting patients for the hydroxychloroquine arm of a global trial called Solidarity. The agency had paused the branch of the experiment, which compares the impact of a number of treatment regimens, after the now retracted research was published in the Lancet.

Mr Trump has touted hydroxychloroquine, saying he’s taken it as a preventative against the coronavirus. Use of the drug has since become politically charged, and several studies - including the Lancet article - had raised safety worries about the pills in Covid-19 patients. – Bloomberg