101-year-old Encarnacion Buisan, the first coronavirus patient to be admitted to hospital in Huesca, has become a symbol of hope for Spain after she was declared free of the virus. Video: Aragon Government 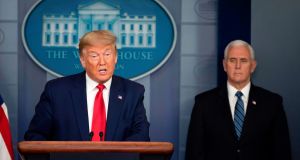 US president Donald Trump, flanked by US vice-president Mike Pence, speaks during the daily briefing on Covid-19, at the White House in Washington, DC. Photograph: Jim Watson/AFP via Getty Images

Spain reported its first decline in new coronavirus deaths in more than a week on Friday, suggesting strict confinement measures may be helping to bring the outbreak there under control.

Total deaths rose by 932 to 10,935 in the past 24 hours, a smaller gain than Thursday’s rise of 950, according to data from Spain’s health ministry. The number of confirmed cases also increased by less than in the previous day, with 7,472 new infections taking the total to 117,710. Nevertheless, Spain is now second in numbers of infected to the US, which has a population some seven times larger.

Meanwhile, the UK’s death toll from the novel coronavirus known as Covid-19 has risen by 684 to 3,605, up 23 per cent on the previous day’s figure. There have now been more deaths from the virus recorded in the UK than in China. As of 9am on Friday, a total of 173,784 people had been tested there for the virus, of which 38,168 tested positive.

Global coronavirus infections surpassed 1 million on Thursday, a milestone reached just four months after the first cases of Covid-19 surfaced in China. More than 54,000 people have died as a result of the virus around the world.

The top official in Wuhan, the epicentre of the coronavirus epidemic in China, has warned residents to stay vigilant and avoid going out. The warning comes a few days before travel restrictions on the city are scheduled to be lifted. On Friday China reported 31 new confirmed cases, including two locally transmitted infections. Four people died, all of them in Wuhan.

The country where the virus emerged late last year will hold three minutes of silence nationwide on Saturday to mourn the thousands of “martyrs” who died in the fight against the epidemic, the official Xinhua news agency reported. Air raid sirens and the horns of automobiles, trains and ships will “wail in grief” after the minutes of silence are observed.

Authorities aim to ward off a second wave of infection from incoming travellers, while also easing some of the country’s stringent containment measures. China has reported more than 81,600 cases of the virus since the outbreak began, including 3,322 deaths. However, it has only recently started counting asymptomatic cases of coronavirus, prompting criticism from some international experts.

Canadian officials on Friday blasted a move by US president Donald Trump to block 3M Co’s export of N95 respirator masks for use by doctors and nurses in other countries as coronavirus cases were projected to soar in Canada’s most populous region, Ontario.

N95 masks, essential for protecting healthcare professionals from breathing in coronavirus, are in short supply. Canadian prime minister Justin Trudeau said blocking the flow of medical supplies across the border would be a “mistake”.

Mr Trump said on Friday that the US government is now recommending Americans wear cloth face coverings on a voluntary basis to stem the spread of coronavirus. In a daily briefing with reporters, Mr Trump stressed that the US Centers for Disease Control and Prevention does not advise the use of medical grade masks.

Infections in the US have now totalled 240,000 and account for about 24 per cent of the more than 1 million cases worldwide.

At an earlier briefing, Dr Deborah Birx, the co-ordinator of the White House taskforce on the coronavirus, urged Americans to do better at social distancing.

New York has suffered its deadliest single day from Covid-19, with 562 additional deaths in the last 24 hours for a total of 2,935 fatalities, by far the most of any US state, governor Andrew Cuomo said on Friday. Mr Cuomo warned that people were “going to die in the near term” due to a lack of ventilators and hospital beds and called for resources from across the US to be deployed to New York to help it deal with the growing crisis in the state.

An ocean liner forced by a deadly onboard coronavirus outbreak to languish at sea since mid-March pulled into a south Florida port, after authorities settled plans for the vessel and its sister ship to dock and for most passengers to come ashore.

Mexico’s Grupo Modelo said on Thursday it will temporarily stop brewing Corona beer and other brands exported to 180 countries after its business activities were declared non-essential under a government order aimed at curbing the spread of coronavirus.

On Friday, Italy recorded 766 more deaths, for a total of 14,681, the worst of any country, but new infections continued to level off.

In the UK, the prince of Wales officially opened London’s new NHS Nightingale Hospital which will treat intensive care Covid-19 patients. Charles, who earlier this week completed self-isolation following his Covid-19 diagnosis, launched the 4,000-bed temporary facility at the ExCel convention centre in east London via video-link. The queen is to address the UK on Sunday with a message about the coronavirus outbreak, Buckingham Palace has said. The televised address will be broadcast at 8pm on Sunday.

Deaths in Germany climbed to 1,074 on Thursday, a day after the government extended a nationwide lockdown beyond Easter. The toll was 931 the previous day, according to data from Johns Hopkins University. Confirmed cases increased to 84,264 – the third-highest in Europe – from 77,981. The head of Germany’s public health authority said this week he expects the nation’s relatively low death rate of 0.8 per cent to rise in the next few weeks.

German chancellor Angela Merkel returned to work in her Berlin office on Friday, after two weeks of home quarantine.

Hungarian journalists say a new law supposedly aimed at fighting coronavirus will make objective reporting of the pandemic harder and leave them open to facing court cases or even jail time for their reporting.

The Netherlands announced a further 148 deaths linked to coronavirus on Friday, bringing the country’s total to 1,487. It also confirmed 1,026 new coronavirus cases, taking the overall tally of infections to 15,723, according to the daily report from The National Institute for Health.

A spike in novel coronavirus infections and deaths in Stockholm has raised questions about Sweden’s decision to fight the outbreak without resorting to the lockdowns that have left much of Europe at a standstill. Sweden reported 612 new cases on Friday, bringing the total to about 6,000. The death toll has reached 333, with fatalities now running at about 25-30 a day, according to the Swedish Health Agency.

Australian officials closed internal borders on Friday and warned people to stay home over the upcoming Easter holiday as the country seeks to capitalise on a further fall in the rate of new coronavirus cases. Chief health officer Brendan Murphy said the daily increase in new infections had fallen to about 5 per cent from between 25 and 30 per cent two weeks ago. Australia has now reported about 5,200 cases and 28 deaths.

Mr Murphy also said as many as 10 million people globally may have been infected by the new coronavirus – with the underreporting due to a lack of testing in some countries for the highly contagious respiratory disease.

Japan is bracing for an explosive surge in coronavirus infections cases, senior government officials said, while continuing to resist calls to declare a state of emergency to fight the pandemic. “We are really continuing on the brink of the brink,” economy minister Yasutoshi Nishimura told reporters on Friday in Tokyo, in one of several fresh warnings about the potential for a more widespread outbreak in the country. Mr Nishimura said that the government was concerned about the capital, where confirmed infections have more than doubled in a week to almost 700.

Singapore reported another coronavirus-related death on Friday, raising the city-state’s total number of fatalities from the virus to five. The latest death was of an 86-year-old female Singapore citizen, the health ministry said in a statement. The country has reported 1,049 coronavirus cases in total.

A 61-year-old coronavirus victim has died in Kyrgyzstan, the government said on Friday, the first virus fatality in the central Asian nation. The patient, treated in a hospital in the southern province of Osh, had suffered from other serious diseases, the authorities said.

India is expected to remain under complete lockdown until mid-April in a bid to stop the rapidly spreading coronavirus outbreak that’s infected 2,543 people in the country, with deaths there climbing to 72, according to John Hopkins University data.

Saudi Arabia has advanced to 3pm its curfew in three areas, starting from Friday until further notice, state news agency SPA said, citing a senior official of the interior ministry. The measure in the city of Dammam, and the governorates of Taif and al-Qatif, aims to rein in the virus, as the kingdom has recorded 1,885 infections and 21 deaths, the most among any of the six members of the Gulf Co-operation Council.

Israel put up roadblocks on Friday to seal off an ultra-Orthodox Jewish town badly affected by coronavirus, but ordered in soldiers to support the residents. – Reuters