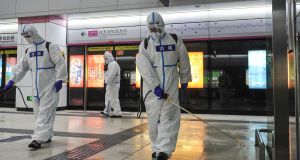 Staff members spray disinfectant at a subway station in Wuhan as the subway prepares to reopen to the public after closing due to the coronavirus outbreak. Photograph: STR/AFP via Getty Images

China will temporarily bar entry to returning foreigners with valid visas and residence permits and will drastically cut international flight routes, in a bid to stave off a second wave of coronavirus infections.

Seeking to curb the number of imported Covid-19 infections, China’s foreign ministry announced it would block foreigners from entering the country from Saturday, including those who live in the country and have valid paperwork.

The ministry posted a notice saying it has “decided to temporarily suspend the entry into China by foreign nationals holding visas or residence permits still valid to the time of this announcement,” adding it was “a temporary measure that China is compelled to take in light of the outbreak situation”.

The number of domestic infections in China has dwindled significantly in recent weeks but authorities have now reported more than 500 imported cases.

Foreigners have accounted for a only small proportion of the imported infections coming into the country, however, officials said.

More than 90 per cent of the infected passengers who have entered China recently were Chinese nationals, with nearly half of that group students studying overseas, they reported.

The announcement is one of the more stringent travel bans imposed anywhere in the world since the outbreak began, prohibiting foreign residents as well as other travellers.

Measures already in place require all international arrivals to spend a 14-day mandatory quarantine period in a government-designated hotel, at the traveller’s own expense. Foreign diplomats will not be subject to the new ban, the ministry said.

In a further bid to reduce the flow of traffic into the country, the Civil Aviation Administration of China said that Chinese airlines would be allowed to fly only one weekly route per country, operating at no more than 75 per cent capacity. International airlines will be restricted to one flight a week to China, at less than three-quarters capacity.

With flights on commercial carriers already extremely scarce in recent weeks, reports have circulated of the families of some Chinese students paying up to €30,000 for seats on private jets back from North American and Europe.

On Friday, China’s health commission reported 55 new confirmed coronavirus cases, with all but one involving imported cases. The one local transmission was located in the eastern province of Zhejiang.

The previous day, all 67 new cases reported were imported infections.

After two months of stringent lockdown measures China is gradually returning to normality, with people now back to work in most cities and classes recommencing in some areas.

Restrictions across most of Hubei province were lifted this week, while the capital Wuhan – the epicentre of the outbreak – is scheduled to reopen fully on April 8th.

The Chinese figures do not include positive tests of people who do not exhibit symptoms, officials said, which reports indicate could account for at least an additional 43,000 cases.

Globally the coronavirus has infected more than 531,000 people and killed more than 24,000.