Iran to open 2,000-bed field hospital as it struggles to counter coronavirus 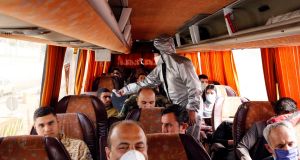 A member of Iranian red crescents test passengers of a bus for possible coronavirus symptoms, as police blocked Tehran to Alborz highway to check every car following orders by Iranian government, Photograph: EPA

A 2,000-bed Iranian military field hospital will open in an exhibition centre in Tehran this week to treat patients recovering from coronavirus as the isolated and sanctioned country struggles to counter the disease.

While the government has announced it will pay the cost of care for virus cases, Iran lacks the financial means to obtain urgently needed equipment and medical supplies from foreign sources.

The United Nations, Europe, humanitarian agencies, and US Democratic legislators have stepped up pressure on the Trump administration to ease punitive sanctions on Iran. UN secretary general António Guterres declared “solidarity, not exclusion” is urgently needed.

The state department, however, has denied reports that the United States would grant waivers allowing the release of frozen Iranian funds in European banks to enable the country to purchase medical supplies to fight the virus.

The Washington Free Beacon quoted an unnamed state department official as saying Iran has sufficient funds to “spend on humanitarian trade” but “chooses to spend this money on terrorism and proxy groups”.

The US insists that food and medicine are exempt, although sanctions on finance prevent transactions.

Instead of easing the sanctions regime, the US treasury has imposed fresh measures on individuals and companies accused of dealing with Iran’s Revolutionary Guards Corps, which the Trump administration has branded a terrorist organisation.

Since Iran cannot obtain supplies from abroad, the UN has had to boost aid to Iran. The World Health Organisation has delivered protection for medical workers and test kits. The UN Children’s Fund has sent medicine and equipment for mothers and children, the UN refugee body has provided supplies for refugee and host communities, and other specialised agencies have dispatched food and medical aid.

UN resources are limited and other countries are in desperate need of assistance. Iran cannot rely totally on UN agencies.

The latest tally in Iran is 38,309 virus cases, 2,640 deaths, and 12,391 recoveries. Since the first two cases appeared on February 18th, the number of cases has continued too rise, with daily deaths hovering about 140 while thousands are in critical condition.

While Iranians are sceptical of official figures and fear the number of cases is much higher, the majority who contract the disease experience few or mild symptoms and are not traced, tested and counted, although they infect others.

President Hassan Rouhani on Sunday told the cabinet that experts say that in some provinces the peak of infections has passed while in others the peak is still to come. He warned Iranians the virus would remain a menace until a cure or vaccine is found and urged them to abide by health protocols and continue lockdown.

The virus appeared in the Shia pilgrim city of Qom in February and spread throughout the country. Iran belatedly closed schools and universities, limited travel between cities, suspended religious services, shuttered businesses and shops, temporarily freed prisoners, and ordered lockdown, but these measures were adopted too late.

Iran has also become the regional hub for the spread of the Covid-19 disease.