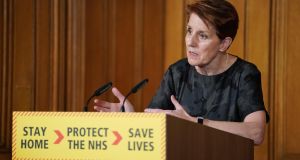 Britain’s death toll from coronavirus has leapt by 563 to 2,352 amid growing concern about the slow pace of testing frontline National Health Service (NHS) staff.

Only 2,000 frontline heathcare workers have been tested for Covid-19, while 125,000 are self-isolating at home because they or their families have experienced symptoms of the virus.

“So that will be a relatively small number, but there is capacity, for example, today for almost 3,000. And that will increase as we get to 25,000, that capacity.

“But the important capacity is in the second strand where we have five centres where people can drive through and get their testing done in order of priority,” she said.

“NHS chief executives are identifying that priority, and the intention here is to get from thousands to hundreds of thousands within the coming weeks. So we are very committed to our NHS frontline staff.”

Two weeks ago Boris Johnson promised to increase the rate of testing to 250,000 a day. However, Britain has struggled to test 10,000 a day, while Germany is testing seven times that number daily.

Prof Doyle rejected an assertion that Britain’s health authorities were dragging their feet about approving an antibody test that could tell if someone has had the virus and has developed some immunity to it.

“This is not a matter of dragging our feet. It’s important that the test is valid, that it does what it says it does,” she said.

The latest increase in deaths is the highest since the epidemic began, and after a number of days when new infections appeared to be falling, they have started to rise again.

“It’s still too early to say whether the plateau of hospital admissions has ended, but we’ve now seen three days of increases in a row and again, we need to protect the NHS, and the best way to do that is to stay at home, to avoid catching the disease yourself, and obviously avoid giving it to anyone else,” Prof Doyle said.

She said Britain would review after Easter the restrictions on movement introduced last week, but she expressed concern that data showed an increase in the use of cars in recent days.

The speaker of the House of Commons, Lindsay Hoyle, has said parliament should be able to function virtually in order to hold the government to account if the country is still under lockdown when the current recess ends on April 21st.

In a letter to leader of the House Jacob Rees-Mogg, Mr Hoyle said that some Commons committees had already held sessions using video technology, and that such a system could be devised for the house.

“Once the house returns,if we are still in the grip of the crisis where the physical presence of members, or too many members, in the palace is not appropriate, I am keen that they should be able to participate in key parliamentary proceedings virtually, for example, oral questions, urgent questions, statements and PMQs [prime minister’s questions].

“Of course the house would have to authorise any changes to such arrangements, via consideration of a motion set down by government, as I cannot do so under my own authority,” he said.