Covid Stories: ‘It was absolute chaos, but we were able to find a sense of peace’ 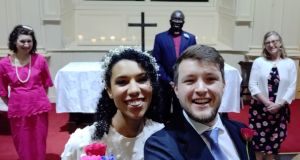 Abbie Yambasu and Brian Alcorn at their hastily arranged wedding ahead of the introduction of further restrictions on movement in response to the coronavirus pandemic.

Frocks and suits were bought, invites sent, the honeymoon in Barbados booked; in planning their April wedding, Brian Alcorn and Abbie Yambasu had prepared for everything, except a pandemic.

The couple met in Kilkenny 2017, on a blind date set up by Alcorn’s brother and sister-in-law, who knew Yambasu from their local Presbyterian church.

They were together for 15 months before Alcorn proposed by the fountain in Kilkenny Castle’s rose garden.

Both had always wanted a big traditional wedding, and had invited 230 guests to celebrate their marriage at St Canice’s Cathedral in Kilkenny on April 26th, followed by a reception at the River Court Hotel.

“As coronavirus took hold, we started to come to the slow and reluctant realisation that we would have to postpone the wedding,” says Alcorn, who works for an agricultural engineering company. “We were heartbroken, but we were concerned about putting people at risk.”

The big celebration was put on hold, but they remained determined to tie the knot.

“We’re quite traditional, we didn’t want to live together before we were married,” says Yambasu, who works as a speech and language therapist. “We had found a home in Kilkenny that we’d started paying rent on, but we didn’t want to move in until after the wedding.”

With a lockdown looking increasingly likely, they faced being separated - Alcorn in Kilkenny, and Yambasu in her father’s home in Waterford. So they pulled the date forward to last Saturday, and were to be married by Yambasu’s father Rev Sahr Yambasu, a minister at St Patrick’s Methodist Church in Waterford, with their mothers as witnesses.

Yambasu was at home in her pyjamas, rehearsing the sermon with her dad, last Friday when she got a message to turn on the news. The Taoiseach was announcing further restrictions on movement due to come into force at midnight.

“It was all systems go,” Yambasu says.

Shirts were ironed and flowers bought in Tesco were pulled from a vase to make a bouquet, held together by tinfoil. She wore a simple white dress, bought for the day after their big wedding, while Alcorn wore “a back-up suit” as his was still in the dry cleaners.

Her father, their two mothers and Alcorn drove to the church to prepare, followed by the bride who hastily packed half her possessions into her car in anticipation of moving into their er new home after the wedding.

“The adrenaline was a bit mad,” Alcorn says. “But we got to the church and it was so peaceful. The streets were deserted, and it was so quiet.”

Yambasu’s father married them, and their mothers sang and said prayers. Social distancing was adhered to, Yambasu says, so there were no hugs, which was “especially hard for our mums”.

They took some hasty photographs, and left the church by 11.30pm, just in time for lockdown.

“It’s the opposite of what we planned originally. It was absolute chaos, but we were able to find a sense of peace. Even though there was so much wrong in the world, in that moment, for us, everything was right in our world,” Alcorn says.

Self-isolating at home is a very different honeymoon to two weeks in Barbados, but the couple are making the most of it, together.

“We’ve only just moved in, so other than resting and getting our energy back, we’ve been getting the house set up. We’ve a lovely garden, so we’ll be planting some veggies, and we’ve a couple of hens in a coop. So you never know, if things get worse, we’ll be self-sufficient!”

“We feel really blessed,” Yambasu adds. “It’s lovely to have this time to set up home together.”