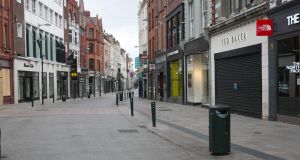 The immediate economic price of the coronavirus is quickly becoming evident. The numbers relying on unemployment or special income supports has soared to over 500,000 – and will go higher. Taxes in March were 20 per cent down on the same month last year as spending taxes tanked. And the Central Bank’s latest report says that the economy might contract by 8 -9 per cent this year, with an even bigger initial hit during the shutdown period.

None of this is surprising, but it is sobering. People are losing their jobs and others face an uncertain outlook for their employer. The ripples are spreading across the economy, and nobody can say with any confidence when some kind of economic normality might return, or what it might look like. It is entirely reliant on the success of the vital work of trying to suppress the outbreak and difficult judgments on what happens then.

The economy will recover when the restrictions are eased, but there are two main concerns. One is the longer they have to continue, the more long-term economic damage will be done. Given the likelihood that the restrictions will be eased slowly and gradually, some businesses will simply not survive and some jobs lost will not be immediately regained. The second is whether some sectors may take even longer to recover – tourism could be vulnerable here if people are nervous of travelling, for example.

Given the speed at which the crisis has hit, the Government and other public authorities, including the Central Bank, have responded quickly and, generally, appropriately. Widescale income supports are costly but essential, and other measures to help those with mortgages or renting are also vital. More may be needed, including in the key area of business credit. The Government has committed significant sums and will have to spend more, but difficult decisions lie ahead, too, on what it can and cannot afford to do. For the moment the job is one of damage limitation; we must hope that a successful effort to control the virus can lead to the focus moving – sooner rather than later – to the big job of rebuilding.