Irish citizens stranded on coronavirus ship off US to be repatriated 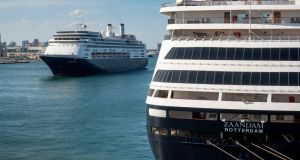 Preparations are being made for the repatriation of a group of Irish citizens who have been stranded aboard the MS Zaandam, after the vessel docked in Florida on Thursday night.

It is expected that the ten Irish citizens on board will fly to London on a chartered flight, possibly on Saturday.

The Dutch-registered ship, along with a second vessel, the Rotterdam, docked at Port Everglades on Thursday evening. Passengers aboard the Zaandam who were not showing signs of the coronavirus were transferred to the Rotterdam earlier this week, near the Panama Canal, following an outbreak of coronavirus on board.

Both vessels received permission from Florida’s governor Ron De Santis and Broward County officials to dock in the southern US state on Thursday.

Four people have died on the vessel which departed Argentina on March 7th and had been scheduled to end in San Antonio, Chile on March 21st. More than 200 passengers have fallen ill over the past two weeks.

The Zaandam had been refused permission to dock in Chile, however, and was initially denied permission by Panama to cross the Panama Canal. Ultimately Florida permitted the Zaandam and the Rotterdam to dock.

It is expected that some passengers will transfer to hospitals in Florida immediately, while non-US nationals are expected to be bussed to Fort Lauderdale to take flights back to Europe. Those with symptoms will remain on the ship, officials in Florida said. More than 50 Floridians are among the passengers. Florida has seen an uptick in coronavirus cases in recent days, with the Governor issuing a stay-at-home order for residents on Wednesday.

The Irish embassy in Washington has been centrally involved in the rescue efforts along with other European countries including Britain.

Passengers from over thirty countries were aboard the Zaandam which had a total of 1,243 guests and 586 crew on board.