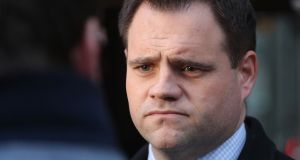 Fine Gael TD Neale Richmond: “One of the stated aims of this commission is the maintenance of the rule of law.” Photograph: Nick Bradshaw

Ireland joined 12 other members of the European Union to appeal for pandemic emergency measures to respect rule of law and be time-limited in a joint statement after Hungary’s imposition of indefinite rule by decree.

Two-thirds of the Hungarian parliament voted this week to give the government of nationalist firebrand Viktor Orban sweeping powers of direct rule, including the ability to jail people for years if they spread information deemed incorrect.

Without mentioning Hungary by name, the joint statement from the 13 invited the European Commission to scrutinise emergency measures taken in response to the coronavirus pandemic and monitor whether “the fundamental values of the Union are upheld”.

“In this unprecedented situation, it is legitimate that member states adopt extraordinary measures to protect their citizens and overcome the crisis,” the countries wrote. “We are however deeply concerned about the risk of violations of the principles of rule of law, democracy and fundamental rights arising from the adoption of certain emergency measures.”

“Emergency measures should be limited to what is strictly necessary, should be proportionate and temporary in nature, subject to regular scrutiny, and respect the aforementioned principles and international law obligations. They should not restrict the freedom of expression or the freedom of the press,” it added.

Fine Gael TD Neale Richmond said the imposition of indefinite direct rule in Hungary amounted to a serious dilemma for the EU.

Mr Orban’s Fidesz party is in the same pan-European political party as Fine Gael in the European Parliament. It was suspended from the European People’s Party (EPP), a grouping of right-leaning national parties, amid concerns about rule of law last year.

Allies of Mr Orban in Eastern Europe have blocked past attempts to sanction Budapest and to outright expel Fidesz from the EPP, but Mr Orban’s latest move has galvinised support for outright expulsion, including in Ireland, Finland and Malta.

Seán Kelly, Fine Gael’s leader in the European Parliament, has called for Fidesz to be expelled from the EPP.

“There is a feeling that Orban may be looking to be expelled rather than to leave voluntarily,” Mr Kelly said. “He could play the victim, and some people think that’s what he’s aiming for . . . certainly since suspension there hasn’t been any pulling back from any of the actions he has taken.”

On Friday, the European Court of Justice ruled that Poland, Hungary and Czech Republic broke EU law by refusing to take in refugees, laying the ground for a fresh clash between eastern states and European institutions.

At the height of the migration crisis in 2015, Poland and the Czech Republic agreed to accept 100 and 50 migrants under a burden-sharing plan agreed by EU leaders.

The court said that Poland ultimately took in none, the Czech Republic only 12, and that Hungary had refused to take any people from the outset.

The failure of the burden-sharing plan is a major source of acrimony in the EU, as countries like Italy and Greece feel they have been left to shoulder a disproportionate responsibility for people fleeing poverty and war.