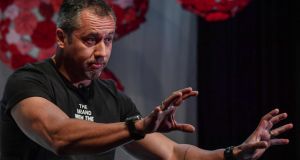 Brazil’s culture secretary Roberto Alvim was sacked on Friday after posting a video in which he appeared to copy a speech by Nazi propaganda chief Joseph Goebbels.

The video, released on Thursday announcing national prizes to revitalise the arts in Brazil, quickly went viral, attracting outrage due to its at times word-for-word similarity to Goebbels’ speech.

“I reiterate our rejection of totalitarian and genocidal ideologies,” Mr Bolsonaro said, adding his government’s unconditional support for the Jewish community.

In the video, Mr Alvim, a theatre director appointed last year by Mr Bolsonaro, announced the prize as music played in the background from a Wagner opera, Hitler’s favourite music.

“Brazilian art of the next decade will be heroic and it will be national . . . and imperative because it will be rooted in the urgent aspirations of our people, or it will be nothing,” he said in the video.

Goebbels, Adolf Hitler’s notorious ideologue, told theatre directors during the Nazi regime that: “German art of the next decade will be heroic, will be wildly romantic, will be objective and free of sentimentality, will be national with great pathos and equally imperative and binding, or else it will be nothing.”

Mr Alvim apologised on Facebook for what he said was an “unintentional error.”

“If I had known of the origin of the phrase I would never have used it,” Mr Alvim said, explaining the speech had been written based on ideas provided by his aides. – Reuters