Will US-Taliban peace deal bring an end to the Afghan war?

Explainer: Fragile breakthrough aimed at withdrawal of US troops faces many obstacles 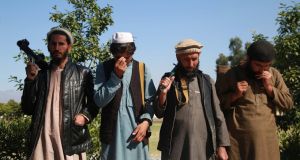 Former militants surrender their weapons during a reconciliation ceremony in Jalalabad, Afghanistan on Sunday, a day after US officials and Taliban representatives signed an agreement. Photograph: Guhlamulla Habibi/EPA

US president Donald Trump declared that talks with the Taliban were “dead” in September. But after nine halting rounds of negotiations, the US signed a peace deal with Taliban leaders on Saturday aiming to secure the withdrawal of all US and allied troops from Afghanistan. However on Sunday, there were already signs that the fragile breakthrough would be hard to keep alive.

The US has agreed to withdraw all its military forces from Afghanistan, including contractors, trainers and advisers, within 14 months. All coalition partners, including Nato, will also withdraw their 39,000 troops in this timeframe.

Washington will start with a reduction of about 4,000 troops within 135 days, bringing the total remaining to 8,600, along with a proportional reduction by allied and coalition forces. The US will seek UN Security Council endorsement for the deal and push to remove all sanctions against the Taliban by August 27th.

As part of the deal, up to 5,000 Taliban prisoners are to be released by March 10th, with the rest to be freed three months after that.

In return, Taliban leaders have pledged to break with al-Qaeda. They have also agreed to start intra-Afghan talks with the country’s politicians and civil society to reach a permanent ceasefire and the Taliban’s inclusion in the Afghan government.

Will women’s and minority rights be upheld?

The deal is silent on this matter. The Taliban describes itself as the Islamic Emirate of Afghanistan and wants Afghans to live under its version of sharia law. It is unclear how its inclusion at the heart of Afghan government could accommodate women and girls, who now make up 39 per cent of Afghan schoolgoers. Under five years of Taliban rule that ended with the US invasion of 2001, women were banned from work and education, were required to wear burkas in public and subjected to forced underage marriage.

Any deal will also seek to address the historical grievances of the three main ethnic groups – Pashtun, Tajik and Hazara. A senior Pakistani official warned that past peace arrangements had fallen apart when community leaders “clamoured for their share of the power structure and resources”.

What are the next steps?

Trump said he would “be meeting personally with Taliban leaders in the not-too-distant future”, adding he hoped the group would continue to “kill terrorists” – a reference to the Taliban’s own war against Islamic State (also known as Isis) in Afghanistan.

Afghan negotiators are due to convene further talks on March 10th in Oslo to discuss a political transition, but US officials have said time and location could shift. One of the stumbling blocks is persuading the government in Kabul to release Taliban prisoners by that date, a precondition for intra-Afghan talks.

On Sunday, said he had made “no commitment” to release prisoners before the intra-Afghan talks start – threatening to scupper negotiations before they begin.

Besides a commitment from the Taliban to seek a lasting ceasefire, negotiators have yet to agree an agenda for the talks or even confirm their involvement. US officials said they expected Taliban, women, opposition, political and religious leaders to be involved in talks at some level, but the government had yet to pick its national team.

It is also unclear how the Taliban could be integrated into the Afghan security apparatus and how the army, police and intelligence services would be affected.

Antipathy to Ghani from Abdullah Abdullah – the opposition politician who refused to recognise his election victory and threatened to set up a parallel government until the US last week dissuaded him – is also complicating the political transition.

The deal also commits the US to supporting the economic reconstruction of Afghanistan, which has oil and various mineral deposits, including gold, copper and marble.

Is this the end of the war?

Far from it. Both al-Qaeda and Isis, who have fighters in Afghanistan, are opposed to the deal. British officials said there was a possibility that these groups might seek to exploit the distraction caused by the agreement. In particular, they suggested that the changing dynamics between allied forces and Afghan security forces could give jihadis space to operate more effectively.

US officials also fear Taliban fighters, including some of the thousands the Taliban want released from prison, could continue their association with al-Qaeda or even join Isis, the group’s foe.

It also remains unclear whether Pakistan will refuse safe haven to any groups that threaten US security, as the deal only covers Afghan soil. The US has thanked Pakistan for its support, however, which included releasing the Taliban’s lead negotiator from prison at the request of the US in 2018.

The US said its troop withdrawal was conditional on theTaliban meeting its commitments. The Taliban leadership has been at pains to demonstrate it can control its fighters. But some observers cautioned the week-long relative calm before the deal was too short.

Some analysts also say that intra-Afghan talks have little chance of success. The Taliban would “naturally” return to jihad if the US violates the deal, one spokesperson told the FT. – Copyright The Financial Times Limited 2020