Why I’ve fallen out of love with American politics

I was once besotted with what went on in Washington DC. Now I find myself out of the loop 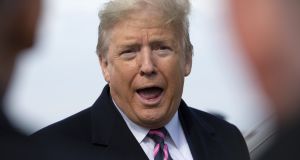 Under president Trump, there has been no shortage of scandal, intrigue or drama. Photograph: Stefani Reynolds/CNP/Bloomberg

Once upon a time, I was completely and utterly besotted with American politics. As a teenager, I was so taken with Barack Obama’s message of hope and change that I stayed home from school to watch his inauguration.

I devoured juicy political memoirs and regularly tuned into Meet The Press to watch politicians tear lumps out of each other. While studying history for Leaving Cert, I did a research project on Margaret Chase Smith, the first woman to serve in both houses of Congress. At one point, I was able to reel off the names of every single US senator. Did I have too much time on my hands as a teenager? Who is to say!

More than a decade later, we are living through much more turbulent and perversely fascinating times. Under president Trump, there has been no shortage of scandal, intrigue or drama. House of Cards often looks akin to Fair City when compared to the real-life goings-on in the White House.

And yet my interest has waned. Where once I would have been frantically refreshing my Twitter feed for updates on the latest political scandal, I now find myself out of the loop when it comes to what is going on in Washington. Case in point: the recent impeachment inquiry failed to capture my attention, and I am currently struggling to muster up more than a passing interest in the ongoing Democratic primaries.

I can trace it back to Brett Kavanaugh’s Supreme Court confirmation hearing in 2018. You may recall that when Kavanaugh was announced as Trump’s nominee, a woman named Christine Blasey Ford accused Kavanaugh of having sexually assaulted her in the 1980s.

On September 27th, both Ford and Kavanaugh appeared in front of the Senate Judiciary Committee to deliver their version of events. Ford told a panel of senators how a teenage Kavanaugh once drunkenly pinned her to a bed and proceeded to grope her and try to remove her clothes. “I believed he was going to rape me,” she said. Kavanaugh later issued a full-throated and angry denial of the allegations. “I liked beer,” he told the committee. “I still like beer. But I did not drink beer to the point of blacking out and I never sexually assaulted anyone.”

The testy exchanges were broadcast live all over the world. Like many, I watched them in their entirety, riveted and repelled in equal measure. Once Ford and Kavanaugh left the stand, the focus shifted to whether or not any senators would withdraw their support for Kavanaugh in light of Ford’s allegations and compelling testimony.

Over the next week, news outlets reported breathlessly on what moderate Republican and Democratic senators were thinking. Meanwhile, I found myself furiously searching the names of Lisa Murkowski, Susan Collins, Jeff Flake and Joe Manchin to see if they were voting “yea” or “nay”’ as though it was some sort of high-stakes reality show.

In the end, all Republicans but Lisa Murkowski voted yes and Brett Kavanaugh was confirmed by the narrowest of margins. And that was that. All the hysteria and hoopla had been for nothing. It was on to the next drama.

As a teenager, I was drawn to American politics for its glamour and theatricality. I admired the way in which their politicians appeared to speak with such power and conviction. In the wake of the Kavanaugh episode, however, I was reminded of how American politics is mired in dysfunction and ugliness. The whole fiasco forced me to rethink my fascination with it.

For one thing, I realised life was too short to be getting hepped up about the actions or voting intentions of obscure senators. We only have a short window on this Earth, so why spend it getting riled up by senator Lindsey Graham?

Likewise, I realised that I wasn’t spending comparable amounts of time dissecting and analysing what was happening in Russia or China or the European Union. Those countries and entities carry similar levels of influence to the United States yet I only check in with them sporadically and otherwise leave them to their own devices. Why should the United States command more of my attention, I thought to myself. Why should I devote my time to caring about a political system I have no say in?

Since then, I have just about weaned myself off American politics. I don’t read every single piece of political analysis that crops up on my Twitter timeline. I don’t listen to slickly produced podcasts à la Pod Save America or The Axe Files. And I certainly don’t spend my time watching pundits arguing with each other on CNN. Instead I find that a five-minute hit on the evening news tends to suffice. I am informed, but not excessively so.

With an election on the horizon, I accept it won’t be easy to turn a blind eye to American politics this year. I also accept that I am liable to get sucked into the drama around delegates, debates, and so on. But for the time being, I will continue to give it a wide berth. Lord knows we have enough of our own political drama to contend with.

Jennifer O’Connell is on leave.