Men with catapults to protect Trumps from monkeys at Taj Mahal 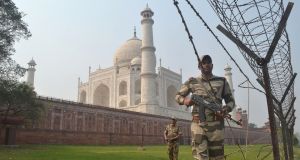 Indian paramilitary personnel, armed with catapults, are being deployed around the 17th-century Taj Mahal to protect US president Donald Trump and his wife, Melania, from being assailed by aggressive monkeys when they visit the monument on Monday.

Official sources in Agra, the city where the Taj Mahal is, 230km southeast of New Delhi, said Central Industrial Security Force (CISF) personnel would be “tactically positioned” around the monument’s 17-hectare compound during the Trumps’ visit as a “shield” against hordes of monkeys who live there.

The Taj, one of the world’s seven wonders, is the Trumps’ second destination on their 36-hour trip to India following a stopover in Indian prime minister Narendra Modi’s western home town of Ahmedabad earlier the same day.

From Agra, the US president travels to New Delhi for day-long meetings with Indian officials and businessmen on Tuesday to reaffirm bilateral strategic, diplomatic, commercial and nuclear ties, before returning home that evening.

Agra’s local administration and the federal government, however, are leaving nothing to chance to protect the US president from the 500-700 rhesus macaques, descendants of those who inhabited the area when it was a jungle centuries earlier.

“The forest department too has been requested to ensure that monkeys stay away from the Taj during Trump’s visit,” said Vasant Kumar Swarnkar of the Archaeological Survey of India, which looks after Indian historical monuments.

Officials said an elaborate CISF “grid”, selected for their prowess with catapults, alongside US Secret Service personnel and Indian security commandoes, are expected to ring the first couple against the simians which, over decades, have lost all fear of humans – irrespective of their importance or stature.

Bands of monkeys seeking food often cause panic among visitors to the Taj by attacking them in groups.

Recently they snatched a baby from his mother while she was feeding him, bit the infant and dumped him on a nearby roof. The child later died of his injuries in hospital. And a few months earlier, two French tourists were savaged by monkeys and had to be injected with an anti-rabies vaccine.

Officials said tourists, especially foreigners, can become excited seeing monkeys in such surroundings and, mistakenly believing them to be friendly, make overtures to them only to be pounced upon.

Efforts to deal with the problem at the Taj Mahal and other locations across India are thwarted due to Hindu religious sentiment. The animals are associated with Hanuman, the monkey-god who helped the Hindu god Rama defeat the evil Lanka king Ravana, in an enduring fable of good prevailing over iniquity.

Innumerable temples dedicated to Hanuman proliferate across India, and millions flock to them every Tuesday, the day associated with the monkey-god.

In another development, the local irrigation department in Agra has recently released more than 17 million litres of water into the polluted, stinking and filth-choked Jumna river that flows behind the Taj, to “improve its environmental condition” for the two-hour sunset visit by the Trumps.

The extra flow had been ordered to clean and remove the foul smell from the river, said Jal Singh Meena, an officer with the Agra Canal department.

To compound matters, Agra’s municipality is battling possibly India’s worst pollution, which has over the years corroded the white marble of the monument that took Mughal emperor Shah Jahan 21 years to complete in 1653 in memory of his late wife Mumtaz.

News reports from Agra said many city roads had been widened and repaved and vast screens hastily erected at several places along the 12km route from the city airport to the Taj to hide shanty towns and slums and numerous walls en route painted with the US and Indian flags.

Some 3,000 local artists, including dancers and musicians, are expected to present cultural events on the road as Trump’s convoy races past them on its way to and from the airport.

District authorities, however, have denied media reports that a bridge on the Trumps’ proposed route to the Taj will be unable to bear the weight of his 6.4-tonne armour-plated limousine known as “The Beast”, and that the president will have to travel in a battery-operated buggy to the monument.