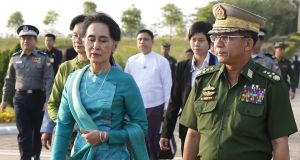 A United Nations body has called for the leadership of Myanmar’s armed forces to be prosecuted for genocide over attacks against the country’s Rohingya minority in a damning report that also blamed Aung San Suu Kyi, Myanmar’s civilian leader, for failing to halt the violence.

A fact-finding mission appointed by the UN Human Rights Council concluded on Monday that Myanmar’s top generals must be held responsible for crimes against humanity including murder, torture, rape and extermination in Rakhine and other states in the southeast Asian nation.

“There is sufficient information to warrant the investigation and prosecution of senior officials in the Tatmadaw [Myanmar military] chain of command, so that a competent court can determine their liability for genocide,” the mission concluded.

The UN body also intensified the pressure on Ms Suu Kyi by saying that her government had “contributed to the commission of atrocity crimes” through “their acts and omissions”.

Although improved in recent months, Facebook’s response has been slow and ineffective

“Aung San Suu Kyi has not used her de facto position as head of government, nor her moral authority, to stem or prevent the unfolding events in Rakhine state,” the fact-finding mission said.

The UN body also criticised Facebook, which it argued had been a “useful instrument for those seeking to spread hate” in a country where the social media platform is a dominant form of communication.

“Although improved in recent months, Facebook’s response has been slow and ineffective,” it said.

Facebook said in a statement that it was “now making progress” in tackling the problem. The company said it was removing Min Aung Hlaing, the commander-in-chief of the Myanmar armed forces, and 19 other Myanmar individuals or organisations, from its platform to prevent them from using it to “further inflame ethnic and religious tensions”.

The UN fact-finding mission called on the UN Security Council to refer the situation in Myanmar to the International Criminal Court (ICC) or create an ad hoc international criminal tribunal. It also called for an arms embargo on Myanmar and for targeted sanctions against those responsible for the crimes against humanity.

The UNSC will be briefed on Myanmar in New York on Tuesday but it is unlikely to refer the Myanmar case to the ICC.

Analysts said that China, which has been supportive of the Myanmar government, was unlikely to back such a move, while Russia and the US were also not supporting ICC referrals at the moment for their own reasons.

“Right now things don’t look great,” said Aaron Connelly, director of the southeast Asia programme at the Lowy Institute, a think tank in Sydney. “It can take many years but it is important to state clearly what has happened and what the consequences should be.”

The military has vast powers in Myanmar, allowing it to shirk civilian oversight, according to the UN.

Unless this security challenge is addressed, the risk of inter-communal violence will remain

Its campaign in Rakhine prompted international outrage, including calls to strip Ms Suu Kyi of her 1991 Nobel Peace Prize.

Ms Suu Kyi defended Myanmar’s handling of the situation in a speech in Singapore last week, blaming a Rohingya terrorist group for the violence. “The danger of terrorist activities, which was the initial cause of events leading to the humanitarian crisis in Rakhine, remains real and present today,” she said. “Unless this security challenge is addressed, the risk of inter-communal violence will remain.”

Also on Monday, a Yangon court delayed the verdict in the trial of two Reuters journalists who reported on the military’s brutal treatment of the Rohingya, saying that the judge was ill. Wa Lone and Kyaw Soe Oo are charged with breaching the Official Secrets Act but both insist they have done nothing wrong. The EU has condemned the prosecution and called for the case to be dropped. – Copyright The Financial Times Limited 2018