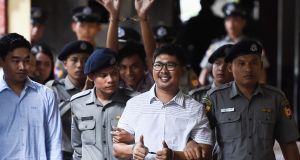 A judge in Myanmar has adjourned the verdict against two Reuters journalists accused of illegally possessing official documents.

The case has drawn attention to the faltering state of press freedom in the troubled Southeast Asian nation.

The verdict in the case of Kyaw Soe Oo and Wa Lone was expected to be handed down on Monday but was rescheduled for September 3rd.

The judge who announced the postponement said presiding judge Ye Win could not attend because he had been ill since Friday.

The two reporters have pleaded not guilty to violating Myanmar’s colonial-era Official Secrets Act, which carries a penalty of up to 14 years in prison.

They were arrested in December and have been detained since then after being denied bail.

The reporters contend they were framed by police while reporting on Myanmar’s brutal crackdown on Rohingya Muslims in the western state of Rakhine that has drawn international condemnation.

“We will not be afraid for whatever decision or situations we are in,” Wa Lone said after the postponement was announced.

“It is because the truth is already on our side. We will not be frightened or scared because we didn’t do anything wrong.”

Reuters expressed disappointment that the verdict was not delivered as scheduled. “Wa Lone and Kyaw Soe Oo have already spent more than eight months in prison based on allegations of a crime they did not commit,” the international news agency said in a statement.

“We look forward to receiving the verdict next week, when we very much hope that they will be acquitted and reunited with their families.”

About 700,000 Rohingya fled to neighbouring Bangladesh after the crackdown began last August and Myanmar’s army has been accused by human rights groups and UN experts of committing massive human rights violations amounting to ethnic cleansing, and possibly genocide.

The two reporters had been investigating the killing of 10 Rohingya by soldiers, police and Buddhist civilians.

In a rare instance of security forces being punished for extrajudicial killings, Myanmar’s government later announced that seven soldiers had been sentenced to 10 years in prison with hard labour for the killings.

The government has denied any widespread abuses but continues to restrict access in Rakhine. – AP