President has been silent on the death of the 81-year-old senator, save for one tweet

After declining to answer a reporter's questions about the late US Senator John McCain throughout the day, US President Donald Trump finally spoke about McCain's passing during a meeting with evangelical leaders at the White House on Monday evening. 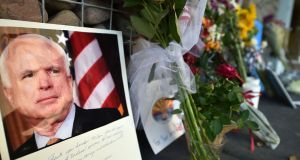 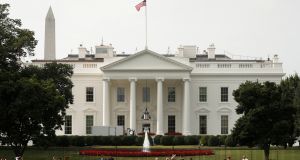 The US flag flies at full staff less than 48 hours after John McCain’s death over the White House in Washington. It has since been lowered again. Photograph: Reuters/Kevin Lamarque

Donald Trump bowed to pressure and ordered flags to be flown at half-mast to honour John Mc Cain, following widespread criticism of his response to the Arizona senator’s death.

Earlier on Monday, the American flag which had been flying at half-mast over the White House throughout the weekend, had been raised, prompting criticism from the two main political parties and the American Legion.

Although protocol requires that flags are lowered on the day and the day after the death of a member of Congress, the President can order the flag to be lowered for longer - typically the case for major public figures. Mr McCain died on Saturday, after losing his battle with brain cancer.

Minutes after the White House flag was lowered, Mr Trump issued a statement confirming he would not be attending Mr McCain’s funeral, but outlining his “respect” for the senator.

“Despite our differences on policy and politics, I respect Senator John McCain’s service to our country and, in his honor, have signed a proclamation to fly the flag of the United States at half-staff until the day of his interment,” the statement said.

The President added that he had asked vice president Mike Pence to speak at a ceremony for the Arizona Republican later this week at the US Capitol.

The statement by the White House followed rising tensions between the Trump administration and friends and family of Mr McCain since his death. Apart from one tweet on Saturday sympathizing with the Mc Cain family, Mr Trump had been silent on the passing of the 81 year-old senator, a giant of the Republican party. The president refused to answer shouted questions from reporters about Mr Mc Cain at two separate press appearances at the White House on Monday.

In a “farewell statement” read by a family friend in Arizona on Monday, Mr Mc Cain addressed his fellow-Americans: “Do not despair of our present difficulties, but believe always in the promise and greatness of America,” it read. The Vietnam war veteran said that he had often observed that he was the “luckiest person on earth,” adding: “I have loved my life, all of it.”

The former senator will lie in state in the Arizona State Capitol in Phoenix on Wednesday. His body will then be moved to Washington where he will repose in the rotunda of the US Capitol on Friday, before a service in Washington National Cathedral on Saturday. He will be buried on Sunday at the Naval Academy in Annapolis, Maryland, where he studied. Two former presidents, President Barack Obama and President George W Bush, will deliver addresses at the funeral service on Saturday.

Mr Mc Cain was one of the few Republicans to outwardly criticise Mr Trump after he became president.

In a key vote in the Senate last summer he voted against a Republican plan to repeal the Affordable Care Act. He also took issue with the President on various aspects of foreign policy, describing the President’s meeting with Russian president Vladimir Putin in Helsinki in June as “one of the most disgraceful performances by an American president in memory.”