Migrants in Libya detention centre say their lives are in peril 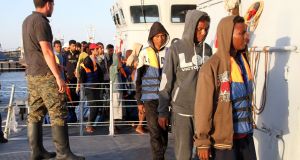 African migrants, who according to the Libyan navy were rescued by the coast guard, arrive in Tripoli on July 12th, 2018. Photograph: Stringer/AFP/Getty

Hundreds of refugees and migrants say they were abandoned in a detention centre in the middle of renewed fighting in Tripoli, after they were returned to Libya earlier this year by the EU-backed coast guard.

The Libyans guarding the detention centre – a prison in Ain Zara, southern Tripoli – ran away on Monday morning, a young Eritrean man told The Irish Times. Food and water has already run out, and refugees risk being killed if they try to leave, he said. Among the hundreds still there are pregnant women and children.

“We hear machine guns, tanks, big bombs. We see from the roof it’s all fire, all everywhere. We need food especially for the children, they can’t tolerate this,” he said. “We see bullets passing over us and heavy weapons passing on the street.”

Migrants intercepted while crossing the Mediterranean have been returned to war-torn Libya since Italy struck a deal to fund Libya’s coast guard in February 2017. This has attracted fierce criticism from human rights groups, while former UN human rights chief Zeid Ra’ad al-Hussein condemned the move as “inhuman”.

Asylum seekers returned to Libya face terrible conditions in cramped detention centres, including torture and extortion, according to Amnesty International.

The International Organisation for Migration (IOM) confirmed fighting in Tripoli had impacted some detention centres, including in Ain Zara.

“Our teams are closely monitoring the situation and assessing how best we can assist. Fighting seems to have ended for the time being, which may allow us to approach the concerned areas,” said Christine Petre, support officer to IOM’s Libya chief of mission.

A local journalist in southern Tripoli also confirmed the fighting, saying it started in the Wadi al-Rabie area. The journalist, who didn’t want to be named, said anti-aircraft guns and even tanks were being used.

The Eritrean refugee, who didn’t want to be identified for fear of retribution, said he has been in the detention centre since March. Even before the fighting, conditions were terrible, he said.

He communicated through texts and calls, using a phone given to the refugees by smugglers to contact the Italian navy during their failed attempt to sail to Europe, which he has kept hidden since.

The refugee fled home after years of forced military service in Eritrea. He said he was arrested by police in Sudan’s capital, Khartoum, who accused him of having no refugee ID card, and then sold him to a group of traffickers. From there, he was brought to Libya, where he was tortured until his family paid $12,000 (€10,280), which they raised by selling their belongings and begging for money from friends. This story echoes those told by many Eritreans in Libya.

He said he was arrested by police in  Khartoum, who accused him of having no refugee ID card, and then sold him to traffickers. He was brought to Libya, where he was tortured until his family paid $12,000

After paying the money, the man was given a chance to be smuggled across the Mediterranean to Italy. However, once the boat was spotted by Italian ships, the refugees on board were turned over to the EU-backed Libyan coast guard, which brought them back to detention in Tripoli.

Since then, he said, he has been living in substandard conditions with hundreds of others. “We eat one time a day, we drink dirty water and there is no kind of hospital. There are many sick people.”

He said three people recently died of tuberculosis, and another was shot by guards after they protested for better conditions and for a visit by the UN Refugee Agency (UNHCR).

“This place is very hot and we need so much water, but the water they give us is very dirty, even you can’t wash your body.”

He said the refugees were regularly abused by guards, with Christians particularly targeted. “They beat and insult them, they cut their necklace of the cross,” he said. “They make the ladies have sex by force.”

Nearly 55,000 refugees and asylum seekers are registered in Libya, though it is believed there are a lot more unregistered across the country. About 20,000 were brought back to Libya by the Libyan coast guard in 2017.

Nearly 55,000 refugees and asylum seekers are registered in Libya, though it is believed there are a lot more

Arrivals across the Mediterranean to Italy have reduced by nearly 87 per cent this year on the same period in 2017, a change the Italian government touts as a success.

At least 8,000 migrants are currently being held across 18 detention centres linked to the internationally recognised government in Tripoli, according to UNHCR.

Speaking on the phone as bombs could be heard in the distance, the Eritrean refugee in Tripoli said he blames the EU and the UN for the situation he’s in. “The Europeans should have helped us. We have a problem in our country. We left to get freedom. The Europeans and the UN don’t care about us. Shame on the EU. Shame on the UN.”

“This is a very dangerous place,” he added. “We have suffered more than anything. There are so many problems. They sell people. We are animals.”

The EU and the UNHCR did not respond to a request for comment.