A live video stream captures the moment that left two people dead and eleven others injured at a video game event in Florida. Video: Twitch.tv/Reuters 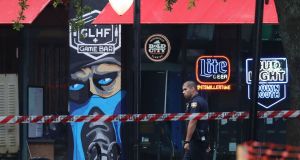 The bar where three people, including the gunman, were killed at the Jacksonville Landing, Florida. Photograph: Joe Raedle/Getty Images

Survivors of a shooting at a video gamers’ competition in Florida in which three people died have told of chaotic scenes as those caught up in the violence trampled over others in panic as they tried to escape.

The dead included the gunman, David Katz (24), a player on the gaming circuit who is believed to have been angry because he lost Sunday’s tournament. Eleven people were wounded in the gunfire.

One witness at the Madden NFL 19 video game tournament in Jacksonville said she saw Katz as he fired while walking backwards.

“We did see him, two hands on the gun, walking back, just popping rounds,” said Taylor Poindexter (26), who had been ordering pizza at the bar when she heard the first shot at about 1.30pm.

“I was scared for my life and my boyfriend’s,” she told reporters, standing on crutches after spraining her ankle trying to escape.

Local media identified the dead victims as Eli Clayton (22), of Woodland Hills, California, and Taylor Robertson (27), of Ballard, West Virginia. Both had been competitors in the tournament, local media reported.

Mr Robertson, a husband and father from West Virginia, was the winner of the tournament last year and Katz, from California, won it the year before, the Miami Herald reported, citing family and friends posting online.

“No one deserves to die over playing a video game, you know?” said Derek Jones (30), a competitor from Santa Fe, New Mexico. “We’re just out here trying to win some money for our families.”

Mr Jones said he was sitting in a patio outside the tournament venue when he heard gunshots and jumped over a fence to flee. “You know, I’m glad I lost today,” he said. “Because if I’d won, I would have been in that game bar right then playing a game and not paying attention. And he could have come and I’d probably be dead right now.”

Jones said he knew Katz by the gamer tags he used online, often “Bread” or “Sliced Bread”, and had played against him online but had never spoken to him personally.

Coverage of Katz, from Baltimore, competing in the past showed him with headphones on and a poker face as commentators remarked on his attitude.

“He’s not here to make friends. He’s all business. He’s focused and to even get him to open up to talk about anything it’s like pulling teeth man,” said one.

The Jacksonville sheriff, Mike Williams, said Katz, of Baltimore, Maryland, carried out the attack using at least one handgun at the Jacksonville Landing, a collection of restaurants and shops, before taking his own life.

The maker of the Madden game, EA Sports, lists a Katz as a 2017 championship winner. Sunday’s competition was held in a gaming bar that shares space with a pizzeria. Viewers could watch the games online and see the players.

The Jacksonville sheriff’s office said 11 other people were wounded by gunfire and at least two others were injured while fleeing the scene.

“Politicians, wake up because the people you’re supposed to representing are dying,” Mr Williams said. “Quit sitting on your butts. Quit collecting cheques and do something.” – Guardian