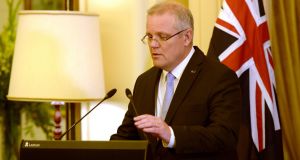 Australian prime minister Scott Morrison after being sworn in at Government House in Canberra. “We are on your side,” he said. Photograph: Martin Ollman/Getty Images

Scott Morrison, who has been sworn in as Australia’s fifth prime minister in five years after the Liberal Party deposed Malcolm Turnbull, sought immediately to address concerns that politicians spend too much time arguing amongst themselves.

“There has been a lot of talk this week about whose side people are on in [parliament]. And what Josh [deputy leader Frydenberg] and I are here to tell you, as the new generation of Liberal leadership, is that we are on your side. That’s what matters. We are on your side.”

Mr Morrison was unable to explain why there was a need to overthrow Mr Turnbull, however. Reasons previously given by those pushing for the leadership change – supporters of home affairs minister Peter Dutton – include controversial company tax and climate change policies.

Mr Morrison defeated Mr Dutton by 45 votes to 40 in a run-off vote by Liberal MPs and senators after foreign minister Julie Bishop was knocked out in the first round.

In an emotional, but controlled, final speech as prime minister, Mr Turnbull said he was proud to have led a “progressive Liberal government”. He had never previously described his government as progressive lest it upset the right wing of the Liberals who had backed him in a previous internal coup to overthrow Tony Abbott in September 2015.

In a departure from the normal protocol in Australia, Mr Turnbull pointedly named those he would allow questions from after his speech. He called upon reporters from the state broadcaster ABC, the Financial Review and the Guardian’s Australian operation for questions, rather than anyone from the Murdoch press or Sky News.

He blamed an internal Liberal “insurgency . . . backed by powerful voices in the media” for ending his prime ministership.

Mr Turnbull also blamed Mr Dutton and Mr Abbott explicitly, saying they had “chosen to attack the government from within . . . because they wanted to bring the government down”.

As soon as news broke that Mr Morrison had won the internal Liberal Party vote, the opposition Labor Party began sending emails to members looking for donations after what it said was “one of the most chaotic and dysfunctional weeks in parliament that our nation has ever seen”.

Labor leader Bill Shorten and his fellow MPs were notable by their absence on television screens and airwaves, though, perhaps content to let the Liberals keep digging the hole they had made for themselves.

Mr Morrison offered an olive branch to the plotters who brought on the move against Mr Turnbull, saying he was prepared to have Mr Dutton “playing a role in the government I intend to lead”. Given Mr Dutton’s miscalculation on the number of votes he had, it is unlikely that role will be in the finance portfolio.

A federal election is due by May next year, but there has been speculation Mr Morrison could go to the polls early. The most recent opinion poll, released last Monday, showed Labor leading the Liberal-National coalition 55-45 after preferences, which would result in a landslide win were it to be repeated in an election.

1 Miriam Lord: Minister for Agriculture tries to get himself out of the manure
2 Skeletal remains discovered in south Dublin were of man missing since 2011
3 Martin criticises ‘over-focus’ on Border poll ahead of Foster meeting
4 Taoiseach rules out united Ireland referendum as ‘divisive’
5 Barry Cowen tells Dáil he is profoundly sorry for ‘stupid’ drink-driving offence
Real news has value SUBSCRIBE