Brexit: Barnier warns UK against blaming EU in event of no deal 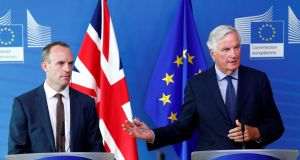 Michel Barnier has warned Britain against attempting to blame the European Union if Brexit negotiations end without a deal. Speaking in Brussels after a meeting with Brexit secretary Dominic Raab, the EU’s chief negotiator said that, although the EU must prepare for no deal, it was working to avoid it.

“Of course, the most costly form of Brexit is no deal, but we don’t want that and we’re not working towards a no-deal Brexit. We have to prepare for it, we have to be ready, and the EU side is doing a lot of work on preparations for that scenario.”

Mr Barnier and Mr Raab agreed that the Border backstop and the future economic relationship between Britain and the EU were the issues where the two sides remained furthest apart. Mr Barnier said both sides could agree on an ambitious free trade agreement, but some elements of the British proposal were incompatible with the EU’s principles.

“Those principles will remain our principles because that’s the way it is, because those are the principles that we’ve been working on, and on which the single market is based. If that is well understood I think we can still find common ground between the guidelines of the European Council, which represent my mandate – 27 heads of state and government decided that – and the [UK government’s] White Paper.”

Earlier, Labour’s shadow international trade secretary, Barry Gardiner, rejected calls for a second referendum on Brexit, which have won support within his party. Mr Gardiner said that, having told voters their decision in the 2016 referendum would be respected, it would be unacceptable to tell them they were “stupid enough” to make the wrong decision.

“That undermines the whole principle of democracy in this country. You never give more succour to the extreme right as when you cut off the mechanism of democratic change. People want to be able to achieve change through democratic means. If they feel that is being denied to them, they then turn to other, more socially disruptive ways of expressing their views,” he said.

“In any situation, if people feel that the root to change is no longer a democratic root, then you look to social disruption, perhaps civil disobedience. This is playing with our democracy, it is playing with the foundations of our country in a way that is really, really damaging.”

Labour does not officially endorse a second referendum but shadow Brexit secretary Keir Starmer has said the party should be open to all options to avoid a no-deal Brexit.

NHS Providers, which represents hospitals and ambulance services, has warned the National Health Service that a no-deal Brexit could pose a risk to services. In an email leaked to the BBC, NHS Providers warns that “there could be both stockpiles and shortages of medicines and medical devices” without national planning and co-ordination for leaving the EU without a deal.