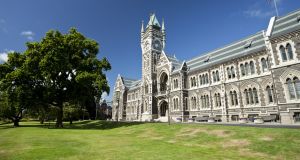 The University of Otago in Dunedin: later said that the decision to remove the magazines was a “mistake”. Photograph: Andia/UIG via Getty Images

Staff from New Zealand’s oldest university have conducted a night-time raid to seize and destroy every copy of a student magazine, fearing that an illustration of a person menstruating on the cover would be “objectionable to many people”.

On Monday night staff seized more than 500 copies of the student magazine Critic from across the campus and dumped them in a large bin.

Critic editor Joel MacManus and his staff had no idea what happened to the copies of the special menstruation issue, and spent Tuesday trying to access campus CCTV footage to identify who had taken them.

It wasn’t until Tuesday night that MacManus learned via a press release that Otago University was behind the disappearance. The university’s actions have since been criticised by MacManus and prominent New Zealand media voices as “censorship”.

“[This] goes against everything a university should stand for,” MacManus said.

“We stand by the content of the magazine, and believe it touched on a number of very important issues about period poverty and trans issues, as well as breaking taboos about a bodily function that half the population experience.”

In a statement, the University of Otago said proctor Dave Scott made the call after requests from Dunedin Public Library and Hospital to remove the magazine from stands in their foyers, because “the cover was objectionable to many people”.

“This was an assumption, rightly or wrongly, that this action needed to be taken as the University is also a public place, where non-students regularly pass through.”

In a further statement, the university clarified their position, saying the decision to remove the magazines was a “mistake”, and “the actions that were taken here are regrettable. The university has no official view, however, on the actual content of this week’s magazine”.

MacManus said Critic had decided to dedicate the issue to menstruation after being approached by Otago Women’s+ Club, with the goal of raising awareness of menstruation issues on campus such as reliable access to sanitary bins and the high cost of sanitary items in New Zealand.

The issue – which has been read more than 18,000 times online – included tips on where to find free sanitary products on campus, an article about moon cups and personal stories from students about having their period.

Seventeen former Critic editors have signed an open letter expressing their “deep concern” over the destruction of the magazines.

Saskia Rushton-Green, the freelance illustrator who designed the cover image of the gender-neutral person menstruating, said the image was intended as an empowering one, with the figure depicted giving the thumbs up despite feeling “gross” while on their period.

“I bleed for about a third of my life and it’s not glamorous,” Ms Rushton-Green said. “There’s a lot of underlying judgment around it that makes bleeding more stressful than it needs to be.”

The majority of New Zealand media outlets chose not to publish the cover of Critic in their articles reporting the incident.

Copies of the Critic issue have appeared on New Zealand auction site Trade Me for sale, with current bids clocking in at NZ$40 (€24). – Guardian