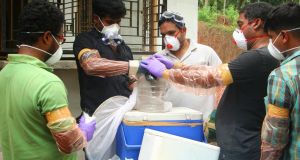 Health officials deposit a bat in a container after catching it inside a well at Changaroth in Kozhikode, Kerala on Monday. The Nipah virus outbreak has triggered a state-wide health alert. Photograph: AFP/Getty Images

India’s federal authorities have dispatched a team of medical specialists to southern Kerala state to investigate the outbreak of the mysterious and little-known Nipah virus, which has claimed at least 12 lives over the past fortnight.

Another 25 people have been hospitalised in northern Kerala’s coastal Kozhikode (formerly Calicut) district with symptoms of the Nipah virus, also known as NiV infection.

Officials said the seven-member multidisciplinary team from the National Centre for Disease Control that arrived in Kerala on Monday would study the virus that is transmitted by animals – largely bats and pigs – and suggest ways to counter it.

Doctors have also warned that NiV-infected people could pass on the infection to others.

With a mortality rate of about 70 per cent and no preventive vaccine to counter it, the World Health Organisation (WHO) has identified the Nipah virus as having the potential for a major outbreak.

Experts said fruit bats also known as flying foxes (genus Pteropus), which are the world’s largest such mammals, were principal Nipah virus carriers, passing it on to humans by contaminating the fruits they consumed.

Officials in Kozhikode, where the 12 people succumbed to the Nipah virus, said they had found remnants of mangoes reportedly bitten into by bats in one of the homes where three family members had fallen victim to the infection.

As a precaution the state authorities have warned people against eating any fruit strewn on the ground under trees.

These symptoms degenerate into brain inflammation, disorientation and delirium, with the patient likely to slip into a coma within 48 hours of contracting the virus.

WHO officials have recommended “intensive supportive care” to deal with the virus, which was first identified in 1998 during an encephalitis outbreak among pig farmers in Malaysia.

At the time more than 300 people were believed to have contracted Nipah, of which about 100 died. Over a million pigs were killed as a preventive measure to contain the virus, resulting in widespread financial losses.

Many people were infected with the virus in Bangladesh in 2004 after consuming date palm sap infected by fruit bats.

Meanwhile, overworked doctors at the government-run Kozhikode Medical College were hard-pressed to convince panicked patients that their fevers and minor ailments were not the Nipah virus.

The hospital inmates were unnerved after a nurse at one of the local hospitals died after contracting the virus from three members of a family she was treating. All three had earlier succumbed to the Nipah virus.

Kerala state chief minister Pinarayi Vijayan has appealed to people not to panic and requested private hospitals not to turn away patients with Nipah-like symptoms, offering to reimburse them for treatment from the state exchequer.